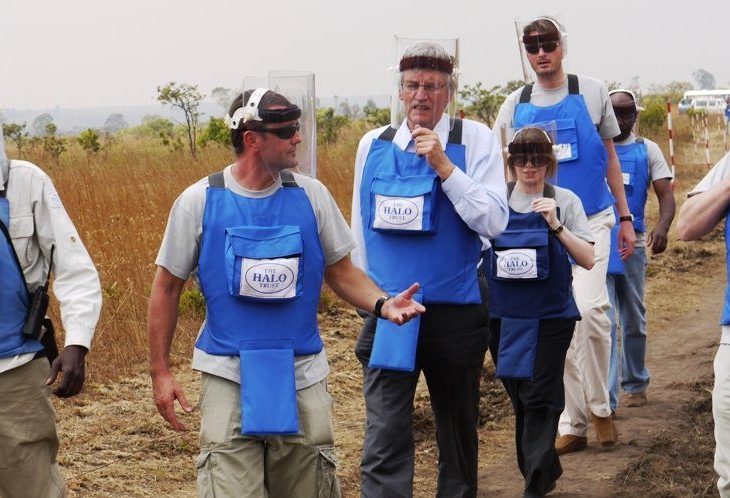 The delegation looks at de-mining activity in Angola

We had the benefit of an excellent and packed programme which made full use of our limited time. For that we are particularly grateful to the members and officials of the National Assembly and to our Ambassador, Richard Wildash and his team.

The visit began with a briefing from the Ambassador. The civil war between the MPLA (Popular Movement for the Liberation of Angola) and UNITA (National Union for the Total Liberation of Angola) aided and abetted by various foreign powers had a devastating impact on the whole population.
Not surprisingly, eight years on, many consequences remain. UNICEF estimates that two -thirds of Angolans live in poverty, 35% of children suffer chronic malnutrition, only 40% of the population have access to government health facilities, and less than 50% have access to clean water. The death rate for children under five is 220 for every 1,000 live births.

Despite all the problems, there is a determination everywhere to look forward not back. Former combatants from the MPLA and UNITA sit together in the Angolan Parliament.

Mines are being cleared from the countryside. Roads and railways are being rebuilt. New towns with new housing are being constructed. And supporting all this development is the huge natural wealth of Angola, in particular its oil, which accounts for more than half the country’s GDP and 83% of government revenue.

The early part of the visit concentrated exclusively on the National Assembly and the political parties. We were welcomed by the Deputy Speaker and then met in turn members of all the political parties represented in the Assembly. The ruling MPLA won an overwhelming 191 of the 220 seats in the 2008 elections. Not surprisingly, they are a party confident in power and confident of retaining it in the next elections scheduled for 2012.
UNITA, the main opposition party, won just 16 seats. They feel very strongly, as do the other opposition parties, that there should be more coverage of their activities in the broadcast and print media.

The relationship between UNITA and the MPLA with such a bloody history of conflict, now at peace for 8 years, is remarkable. They speak with apparent ease to each other when discussing the war and their different interpretations of it, but also look forward constructively to the future.
We also met representatives of the three smallest parties – the Party of Social Renovation, the New Democracy Party and the National Front for the Liberation of Angola. Members of all the parties were extremely interested in our parliamentary procedures in the UK. They particularly wanted to know about the relationship between MPs and their constituents, about the support services available for MPs, and about the ways in which the government is held to account.

One full day of the programme was spent on a visit to the provincial capital of Huambo in the central region of Angola. It is a town which saw more fighting during the civil war than almost anywhere else and there is still plenty of evidence of severe damage to buildings. The town was occupied at different times by both the MPLA and UNITA and we heard dreadful personal accounts of people fleeing the town, of bodies unburied and of almost every family losing at least one member.

During our time there we visited the railway works and were updated on the reconstruction, so important to the economy of the region, of the Benguela railway. We also visited a hospital and a huge agricultural enterprise.

Most memorably, we visited a mine clearance site some 30 kilometres from Huambo. The clearance is the work of the Dumfries based, part DfID financed, Halo Trust. During its time in Angola, the Halo Trust has cleared some 57,000 anti-personnel mines and 13,000 anti-tank mines.
The clearance work is enormously impressive to watch, for the skill of those involved, the dangers they face, and the joy of the people when they can once again farm without fear the land around their villages. There is an estimated ten more years work before Angola can be declared free of landmines. That, when it happens, for one of the most mined countries in the world, will be an outstanding achievement.

Another key phase of our visit involved meetings with ministers from most of the major government departments. We were repeatedly told that Angola would welcome greater UK investment in the reconstruction of the country. UK Trade and Investment in Angola has identified the following sectors as offering the best opportunities for British companies, namely energy – oil and gas, financial services, education and training, construction and agriculture.

The final day of the delegation coincided with the annual celebration of Angola National Day. The Day of the National Hero, as it is called, commemorates the life of Dr Augostinho Neto who in 1975 led the country to independence from the Portuguese and became Angola’s first President. The UK delegation welcomed the opportunity to attend the focal point of the celebration in the centre of Luanda together with members of the Angolan parliament.

The delegation overall attended around 30 meetings in the capital as well as a number of visits including a full day in Huambo. It was a delegation that benefited from the full participation of a group of National Assembly members as well as our Ambassador, all of whom accompanied us throughout.
There is no doubt that the Angolans greatly welcomed our visit which was followed daily in the print and broadcast media. The members of the Assembly are very keen to develop contacts with the UK, especially at a parliamentary level, where they believe that our experience will be of value to them. They are also keen to develop relations of trade and investment and are actively encouraging British involvement.

The British delegation feels strongly that an IPU visit from Angola, which would be the first inward visit since 1999, should be arranged as soon as practicable. We also believe that there are considerable opportunities for British investment and expertise in Angola as the Angolans continue with the reconstruction and development of their country. 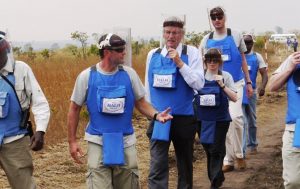 The delegation looks at de-mining activity in Angola