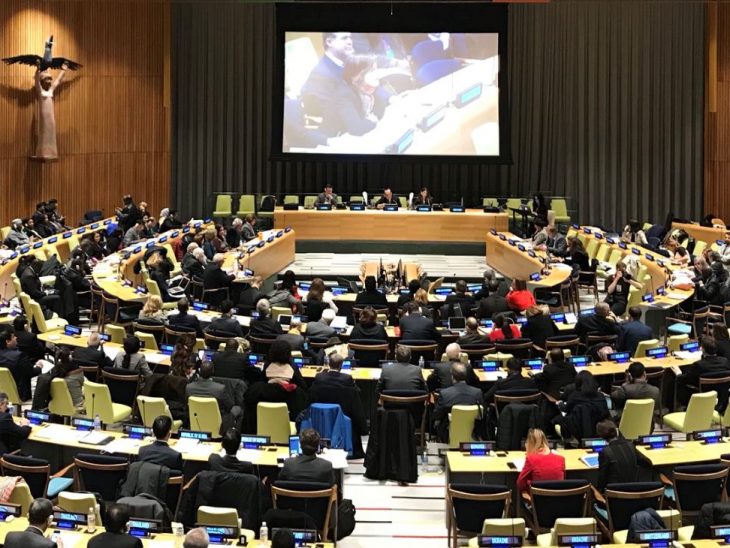 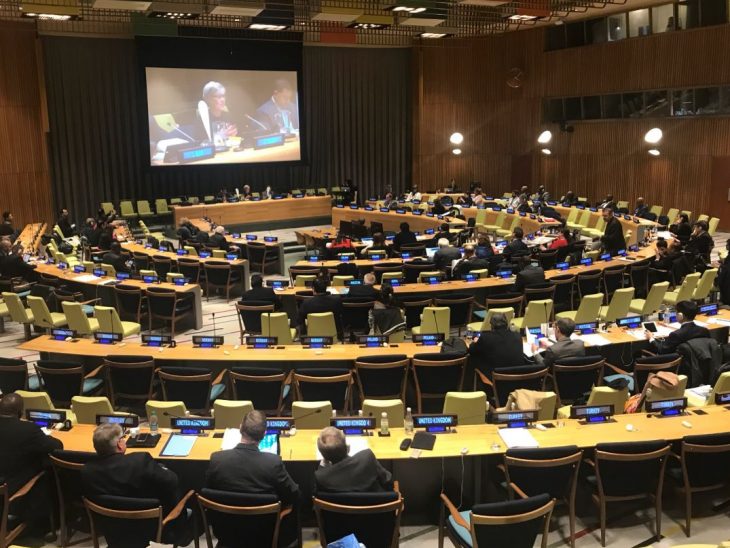 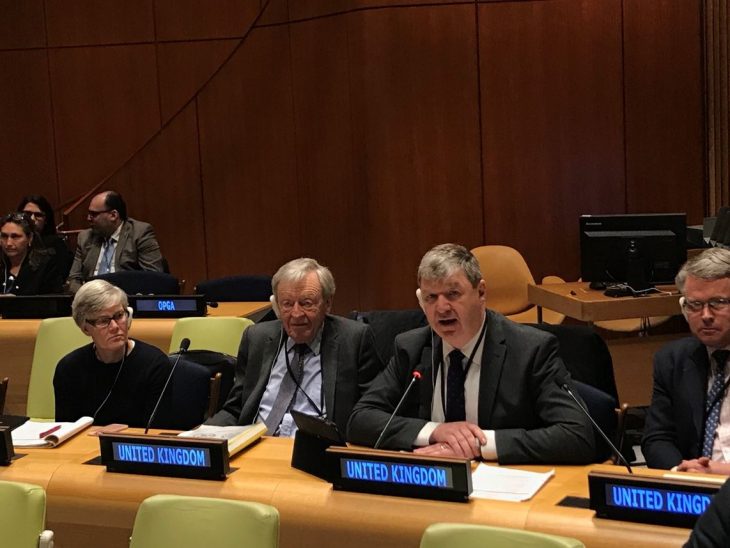 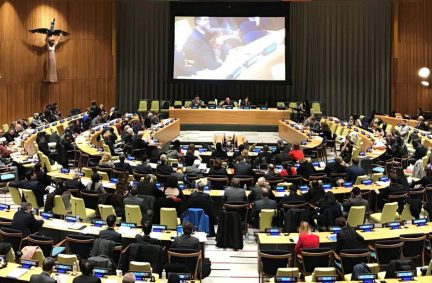 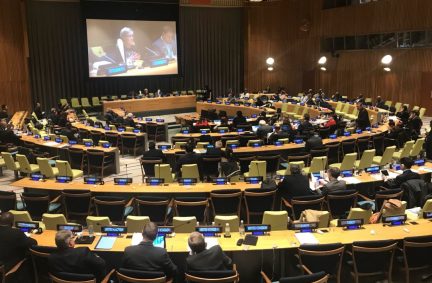 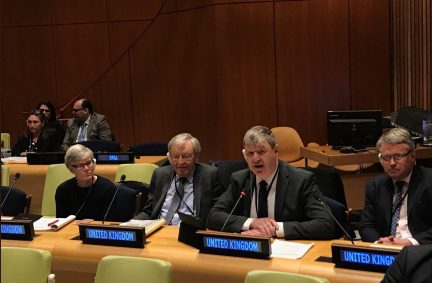 Four British parliamentarians, Tim Loughton MP, Rt Hon Alistair Carmichael MP, Kate Green MP and Lord Alf Dubs, travelled to the United Nations from 21-23 February 2018 to participate in the UN Parliamentary Hearing, entitled ‘Towards a global compact for safe, orderly and regular migration’. They were accompanied by Lauren Tait from the British Group of the IPU, who did a great job in ensuring the smooth running of the UK delegation’s participation.

State level negotiations on the so-called ‘zero draft’ of the compact were beginning as the inter-parliamentary hearing took place. The parliamentary contribution made at the UN Hearing will feed into the non-binding Global Compact on Migration. Given that this is a compact as opposed to a convention, it is worth noting that it is more important that an agreement can be reached between participating countries as opposed to the content of the Global Compact on Migration. What is agreed at this stage will only be one step which is part of a wider process.

The parliaments of approximately 50 countries were represented at the Parliamentary Hearing, including host countries, transit countries and countries of origin. It was recognised that some may fall into more than one category, but there were clear differences in perspective between destination and origin countries, between the North and the South, and between developed and developing economies, in the debates that took place.

The British delegation (and a number of other delegates) were however at particular pains to recognise the pressures which some host and transit countries are facing now as a result of mass population movements from Syria, Iraq, Libya, Burma and parts of sub-Saharan Africa, and to acknowledge our collective responsibility to address the challenges they face. From a European perspective it is also worth noting the particular pressures currently placed on Italy and Greece and, again, this need for shared responsibility. This provoked some discussion of the difference between those afforded protection under the UNHCR on the status of refugees, those forced to move by economic or environmental pressures or as an indirect consequence of conflict, and those moving for economic purposes or for family reunion. In this context, UN officials suggested that a parallel process which is taking place now to agree a global compact on refugees would allow for helpful read-across. However, it should be noted that despite the two separate Global Compacts, there was clear overlap between the two, which caused confusion amongst both participants and members of the panels.

Much discussion focused on the moral obligation of transit and destination countries to treat migrants fairly and with dignity, to recognise their socio-economic rights, to promote integration and community cohesion, and to recognise the economic, cultural and social contribution they make to their hosts. Some countries spoke about the steps they have taken to welcome migrants and integrate them into host communities. A fascinating discussion took place about how host cities and city mayors can take a lead. This was particularly the case in New York, where the Mayor’s Office is ensuring involvement in migration issues and integration efforts of migrants, despite the United States formally pulling out of the Global Compact on Migration towards the end of 2017.

Strongly dissenting (and indeed distasteful) views were expressed by a few host and transit countries who sought to make a case for preventing migration – sometimes in language that was both stigmatising and discriminatory. But delegates from many host countries (including Tim Loughton MP) argued for a balance between aid, investment and development policies to address forced migration and to prevent a ‘brain drain’ from developing economies, while welcoming the economic benefits of attracting new workers, including skilled workers, to the (predominantly economically developed) countries experiencing skills shortages and an ageing demographic.

The rights of migrants, and protections for vulnerable migrants, were highlighted by delegates from all parts of the globe. Lord Dubs called for the recognition of dual nationality to facilitate the preservation of their rights in host countries while enabling them to maintain family and cultural ties with their home countries. Alistair Carmichael MP spoke about the need for active integration strategies in host countries, and condemned nationalist and divisive policy and sentiment. There were widespread calls for collective action to protect child migrants, and to tackle trafficking, exploitation and abuse.

A separate strand of discussion was generated by delegates representing countries of origin about the status and rights of their diaspora communities, the economic impact of outward migration on home countries, and planning for when migrants return home.  But strikingly, in all these debates, the importance of data and evidence barely featured, although the day before the Parliamentary hearing opened, an informal stakeholder meeting brought together civil society and non-governmental organisations and parliamentarians to debate the importance of an evidence-based approach. This lack of attention in the debates to evidence and data was eventually addressed only in the final couple of sessions of the parliamentary hearing, when their importance both for policy–making, and for developing narratives to stem the spread of xenophobic attitudes and behaviours was raised.

Nonetheless, mainstreaming data into the debate must be an important part of the response to calls from a number of delegates for the IPU to maintain a ‘shadow’ workstream alongside the formal negotiation and implementation of the global compact in the months ahead. In the final session of the hearing, Kate Green MP was a member of the platform panel. She suggested that future IPU plenary hearings should be held in parallel with the development of the compact and the follow-up and review mechanisms that are being put in place. Her role as a Member of the UK Parliamentary delegation was therefore instrumental in ensuring that such ideas were placed on the record, alongside her emphasis on the important role played by data and evidence. The next inter-parliamentary meeting in Geneva in March presents an opportunity to take forward that approach. 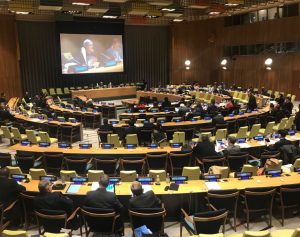 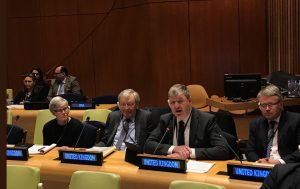