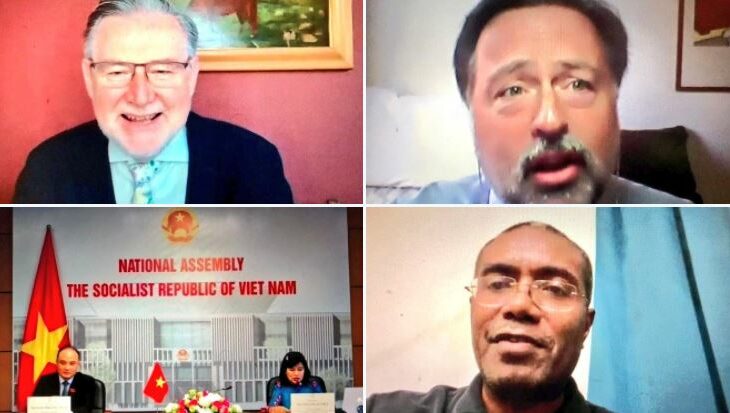 On 24 June, BGIPU hosted the second of its regional COP26 meetings, this one focussing on the Asia-Pacific. Parliamentarians from across the region were presented with an excellent opportunity to discuss their legislative, scrutiny, budgetary and oversight roles to advance climate ambition.

On 24 June, BGIPU hosted the second of its regional COP26 meetings, this one focusing on the Asia-Pacific. Parliamentarians from across the region were presented with an excellent opportunity to discuss their legislative, scrutiny, budgetary and oversight roles to advance climate ambition. Former Shadow Secretary of State for Energy and Climate Change, Barry Gardiner MP, chaired the meeting which was also attended by parliamentarians and officials from Afghanistan, Pakistan, New Zealand, Vietnam, Solomon Islands, Sri Lanka, Federated States of Micronesia, Japan, Thailand, Tuvalu and the United Kingdom.

The UK’s COP26 Ambassador to the Asia-Pacific and South Asia, Ken O’Flaherty who took up his posting in March 2020, began by presenting an overview of his extensive work in the Asia-Pacific and highlighted the need for all countries to come forward with renewed NDCs, setting out long-term strategies including their path to net zero. He noted the dramatic impact that climate change is already having in the region, with Small Island Developing States being particularly hard hit with atolls disappearing due to rising sea levels.  Mr O’Flaherty noted the challenges to delivering a successful COP, the largest being the Covid-19 pandemic. However, he stressed that the pandemic was also a significant opportunity to embrace a green recovery, including investment in renewable energy and the green economy to create jobs and build back more sustainable and resilient economies.

New Zealand was the first case study parliament to take the floor, with Hon. Eugenie Sage MP, Chair of the Environment Committee, providing an overview of New Zealand’s climate change experience and sharing details of its Parliament’s climate policy work. New Zealand has undergone significant legislative reform in recent years, including passing the Climate Change Response Amendment Act in 2019. In addition, there was a 2021 budget policy commitment to raise revenue for mitigation and adaptation. The Chair of Vietnam’s Committee on Environment, Science and Technology, Hon. Nguyen Thi Le Thuy, was next to present and spoke about the situation in Vietnam. Vietnam, which is hit by an increasing number of natural disasters due to climate change, has also made significant legislative reforms, and has been a leader in the ASEAN region. The Vietnamese Member emphasised the importance of budget allocation to ensure the success of disaster mitigation and adaptation to allow for resources to be mobilised for a quick recovery.

Mr O’Flaherty welcomed both contributions from New Zealand and Vietnam but noted that New Zealand’s credibility as a climate leader was dependent on its NDC. The Solomon Island’s Foreign Affairs Committee Chair, Peter Kenilorea Jr. MP, shared his country’s experiences of climate change, outlining the very real impacts that climate change is having in his country. As a result of rising sea levels, the Solomon Islands is already seeing climate migration and the subsequent social impacts that this is having. Mr Kenilorea also drew attention to the theme of loss and damage and highlighted the difficulties for Large Ocean Developing States in accessing funding. He called upon the IPU to continue to help Parliaments to understand their capacities, support institutional strengthening and the development of legislation. We then heard valuable contributions from representatives of Thailand, Pakistan, Sri Lanka and the United Kingdom.

Whilst it was encouraging to hear the many measures being taken by parliaments to mitigate climate change and to adapt, it was only too clear from the delegates’ insights just how real the impacts of climate change have already become across the region. From increased extreme weather to rising sea levels, the Asia-Pacific will continue to be one of the hardest hit regions in the world. BGIPU hopes that the exchange of ideas and best practice through this dialogue and future conversations, will help parliaments to continue to push their climate ambitions and to take action. BGIPU would like to thank Mr O’Flaherty and all the parliamentary participants who took part in this crucial session. 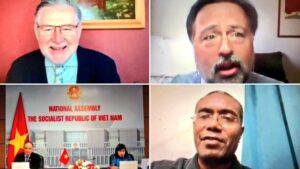 On 24 June, BGIPU hosted the second of its regional COP26 meetings, this one focussing on the Asia-Pacific. Parliamentarians from across the region were presented with an excellent opportunity to discuss their legislative, scrutiny, budgetary and oversight roles to advance climate ambition.