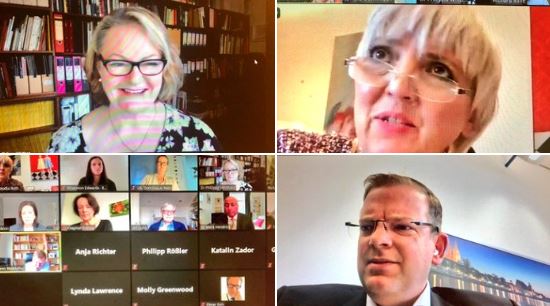 On Friday 9 October, BGIPU hosted a bilateral meeting between UK and German Parliamentarians.

On Friday 9 October, BGIPU hosted a bilateral meeting between UK and German Parliamentarians.   The exchange was chaired by the Germany APPG Chair in the UK Parliament, Dr Philippa Whitford MP and she was joined on the UK side by fellow APPG members, Sir Mark Hendrick MP and Lord Balfe in addition to Jo Gideon MP and including Lord Dubs from the BGIPU Executive Committee.  On the German side was the leader of the IPU delegation of the Bundestag, Dr Johann Wadephul and regular delegation members, Deputy Speaker Claudia Roth, Dagmar Freitag, and Ulrich Lechte.  The meeting was very cordial with a number of participants having known each other for many years through European Parliamentary and inter-parliamentary networks, in addition to the IPU.

Members exchanged views of each country’s approaches to addressing the COVID-19 global pandemic noting the challenges and successes of public health responses and key policy responses undertaken in both countries.  Both sides noted that local responses focused on hot spots and accounting for regional differences were a key part of a differentiated and tailored approach in both countries.  Members also discussed the huge importance of maintaining strong bilateral inter-parliamentary between the UK and Germany post-Brexit, including through close cooperation in the IPU and the continued work of the Germany APPG drawing on the hugely important personal, cultural and economic links between both countries.

Following a discussion on mutual interests in inter-parliamentary bodies such as PACE and the OSCE PA, there was a detailed discussion on current geopolitical trends and developments, recognising the evolving dynamics in power and influence between China, Russia, the US and European countries and including shared concerns at the democratic crisis facing Belarus.  The meeting ended on a high note with all participants agreeing thus such dialogue remained very important to maintain and Dr Whitford MP promised to set up a virtual meeting hosted by the APPG within a month to keep up the contact. 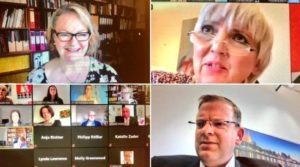 On Friday 9 October, BGIPU hosted a bilateral meeting between UK and German Parliamentarians.