Virtual briefing from Ambassadors of Denmark and Italy on key issues 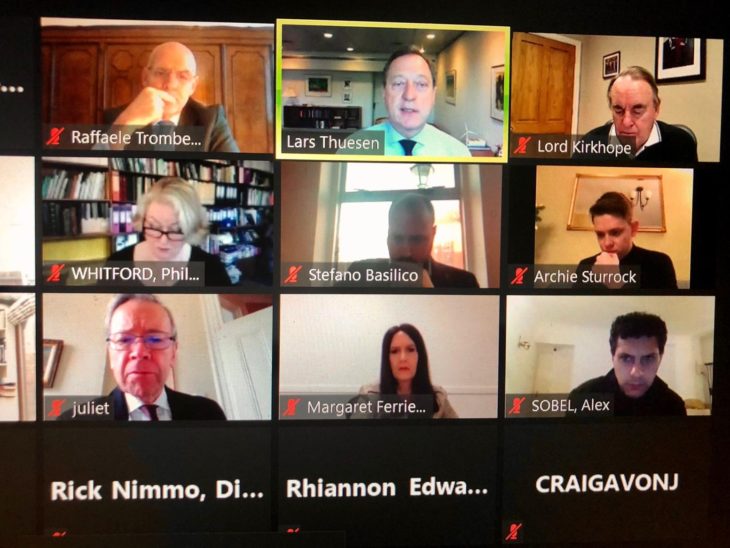 This meeting gave UK Parliamentarians an important opportunity to engage with both Ambassadors, highlighting the importance of dialogue and engagement  with the UK's like-minded and nearest neighbours in the post-Brexit period.

On 14 December, BGIPU hosted a European Ambassador Roundtable which was moderated by BGIPU Vice-Chair Ian Liddell-Grainger MP. This virtual roundtable was a great opportunity for UK Parliamentarians to hear from Ambassadors and ask about recent developments in their countries. The presentations were given by HE Mr Raffaele Trombetta, Ambassador of Italy to the UK and HE Mr Lars Thuesen, Ambassador of Denmark to the UK. This meeting was interesting to compare what each country had been doing in responding to the COVID-19 pandemic, in addition to views on the current Brexit endgame, as well as other key global matters.

The Italian Ambassador started off by highlighting the importance of Italian/UK relations, particularly in the context of the G7 where inequality was a main area of focus, and G20 where Italy would be taking the presidency in 2021. He touched upon the impact of the pandemic, noting it highlighted great inequality and how any rebuilding would need to be focus on improved prosperity. Climate change was also an important issue covered, as Italy has plans to be carbon neutral by 2050, and how important this was for the next generation. He concluded is presentation by focusing on the upcoming cop26 meeting, where the UK and Italy would be working together in hosting COP26 events, and it was mutually beneficial cooperation in multilateral spaces like this and the G7 and G20 where bilateral relations are extremely constructive and positive.

The Danish Ambassador explained the COVID situation in Denmark had been more acute recently after successfully navigating the first wave lockdown but most new infections were young people where the health impacts and hospitalisations were fewer.  He touched upon the recent news out of Denmark, regarding the unique strain of the infection in mink but noted one unexpected side effect of the pandemic was a boom in the real estate market. He also focused on the importance of a close relationship with Britain post-Brexit, saying the UK remained one of Denmark’s closest partners internationally. On climate change, he explained that Denmark planned to be carbon neutral by 2030 and to have stopped all oil and gas extraction by 2050. He explained that these green policies were seen as very good for the business and investment climate in the country.

During Q&A there was further discussion on clean energy, and how it’s important to help encourage greener economic initiatives in developing nations were levels of industrialisation remained high. The Danish Ambassador explained that their development aid was very much focused on climate mitigation and adaptation issues. There was a discussion on the impacts of illegal immigration in Europe and the Italian Ambassador noted this had been a difficult challenge for European policy makers for decades, including finding the right policy responses to addressing increasing people flows from North Africa stemming from instability in the region. Discussions concluded with a focus on multilateralism, including the growing importance of the role of China in the wider world and the need to be able to raise human rights and other concerns while also engaging constructively on other matters like trade, development priorities and the global economy without alienating them.

This meeting gave UK Parliamentarians an important opportunity to engage with both Ambassadors, highlighting the importance of dialogue and engagement  with the UK’s like-minded and nearest neighbours in the post-Brexit period.  BGIPU was grateful for the participation of both Ambassadors for informative briefings and looked forward to further engagement when we can return to in-person events in the palace of Westminster in the course of 2021. 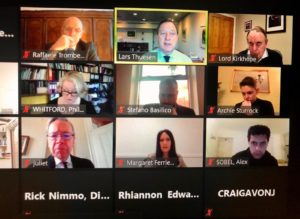 This meeting gave UK Parliamentarians an important opportunity to engage with both Ambassadors, highlighting the importance of dialogue and engagement  with the UK's like-minded and nearest neighbours in the post-Brexit period.