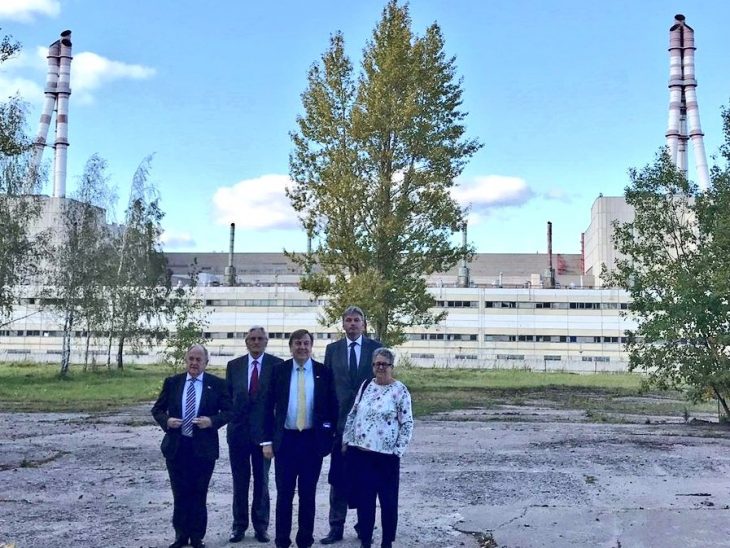 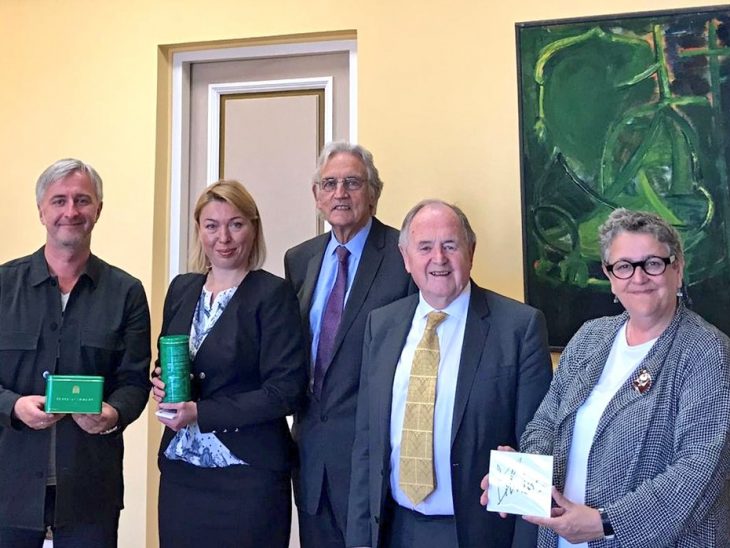 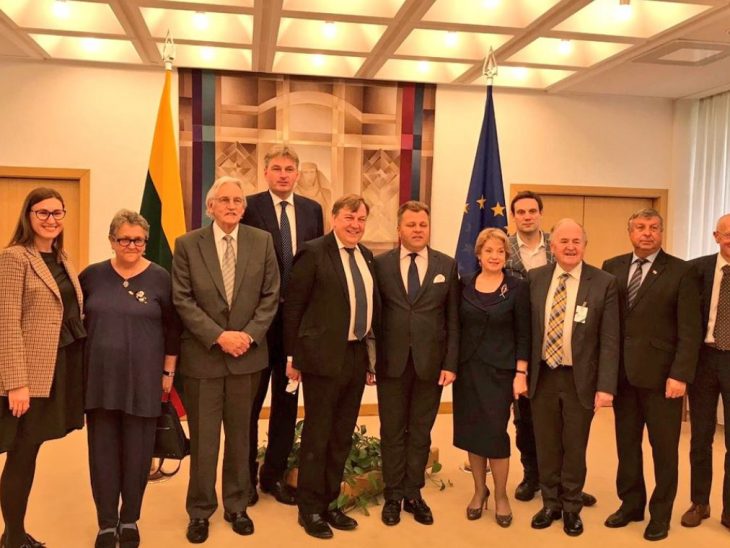 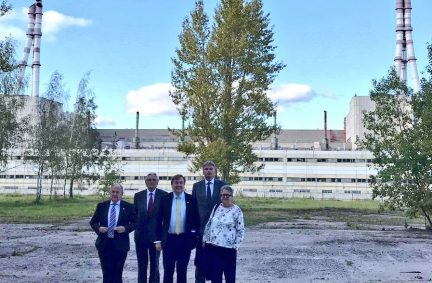 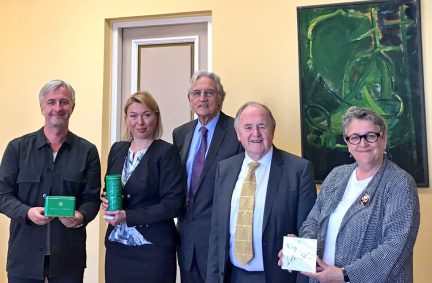 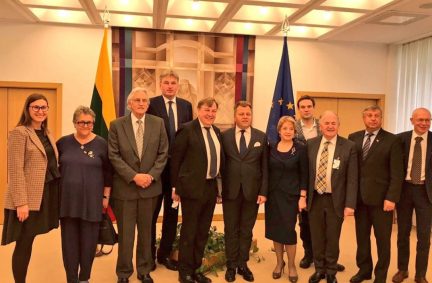 Quite aptly the visit coincided with the centenary celebrations of the establishment of UK-Lithuanian diplomatic relations, and the visit marked the movement towards a new chapter in these strong bilateral ties. Despite the delegations’ differing views on Brexit, there was complete consensus around the UK’s continued support of NATO.

The first day was coordinated by the British Embassy in Vilnius and saw the delegation take a trip north west of Vilnius to the city of Visaginas. The first appointment of the visit was a working lunch with members of the British Council’s Active Citizenship programme where the delegation heard about the various initiatives being led by young people in the region. Following this, the delegation met the Mayor of Visaginas who discussed the issues the city is currently facing with regards to the decommissioning of the Ignalina Nuclear Power Plant, for which was city was purpose built. Along with this the ways the city has focused on the integration of the Russian-speaking majority into Lithuanian society. The delegation then moved to the Ignalina Power Plant’s visitor centre where the director of the power plant talked them through the timescale for the long decommissioning process and its impact on the surrounding area. The day was concluded by a working dinner with H.E. Ambassador Designate, Brian Olley, and members of the British Embassy, in a small town just outside of Vilnius.

Day two saw the beginning of the parliamentary programme which was filled with high level meetings. The day commenced with a meeting with Minister of Defence, Mr Raimundas Karoblis. The Minister explained the current security threats faced by Lithuania, especially with highly militarised Russian exclave Kaliningrad being situated between Lithuania and Poland, and Belarus neighbouring Lithuania to the east. This led on to a meeting with representatives of the NATO Force Integration Unit who explained further the role of NATO in the Baltic states and further emphasised the importance of the UK’s continued support to NATO. The group then turned to focus more specifically on bilateral relations in a meeting with members of the Seimas Group for Inter-Parliamentary Relations with the UK.

Discussion was dominated by the future relations between the UK and Lithuania in the context of Brexit. The Lithuanians expressed concerns about the loss of their transatlantic partner and friend within the European Union which were met with reassurances about the UK’s continued support of Lithuania on a bilateral level. From here, the delegation returned to the Ministry of Defence for a briefing from the Director of the National Cyber Security Centre, Dr Rytis Rainys, on the current threats being faced by Lithuania and what they were doing to counter these. The day was concluded with a reception at the British Embassy to mark the centenary of Lithuania-UK diplomatic relations. Sadly, following the Supreme Court decision both MPs were recalled to parliament and left Vilnius the following morning. However, the three Peers were able to continue with the visit, rotating the position as leader of the delegation.

Day three began with a meeting with the Vice-Minister of Foreign Affairs, Mr Albinas Zananavicius. The Vice-Mininster expressed early on his opinion that Lithuania would prefer the UK to take their time to get a good deal from Brexit and that their priority was to keep the UK close to the EU and Lithuania following the UK’s departure. The Vice-Minister also discussed the construction of a new Russian-funded nuclear power plant close to the border with Lithuania and highlighted the vulnerable position which this put Lithuania in. However, he emphasised the need for continued cooperation with Belarus to promote democracy and decrease its dependency on Russia. The Vice-Minister also expressed his belief that the European community should continue to support Ukraine in its quest to become part of the European Union.

The following meeting with journalists, broadcasters and political scientists took place in the National Library of Lithuania. The meeting covered a lot of ground from the challenges the leading broadcaster, LRT, faced in upholding its quality of output across a range of platforms due to there being two significant minority groups – Russian and Polish. The topic of solution journalism was touched on, highlighting the usefulness of this method as a way of encouraging best practice. The meeting ended with a discussion around the growing sophistication of the Russian fake news being embedded in social media.

The delegation’s final appointment of the day was a very informative meeting with the Vice-Minister of Transport, Gytis Mazeika, and 8 members of his team. This was a fascinating encounter for the group who were keen to learn more about the initiatives being put in place to further connect Lithuania with the rest of Europe. In particular, insights into RailBaltica which is set to connect the three Baltic states with Poland and Finland and will provide a key military route for NATO troops. Moreover, further infrastructure to expand the port of Klaipeda which is a crucial ice-free port for Lithuania in particular, but also used by Belarus and the other Baltic states. The delegation was then hosted for dinner by the Chair of the UK-Lithuania friendship group, Dr Mantas Adomenas, who was joined by 3 other MPs from the group and the British Ambassador.

The final day of the official programme began with a meeting with the Minister of Energy who outlined energy-security challenges related to the current dependence on Russians gas. However, with the building of new infrastructure, Lithuania is gradually becoming more connected to the European grid, thus decreasing their dependency on Russia. Furthermore, with the decommissioning of the Ignalina power plant, Lithuania is looking to new, more sustainable sources of energy, and is leading Europe in terms of their commitments to the development of renewable plans.

From energy, the discussions transitioned to the topic of music, as the delegation moved to the Lithuanian National Philharmonic Society. Lithuania has an exemplary musical education system, providing opportunities for all children to learn an instrument, which has gifted them with some of the most talented orchestras in the world. It was also interesting to learn about the extent to which Lithuanian musicians and music business entrepreneurs see the UK as an important stepping stone to success. In the afternoon, the delegation visited the Visitor Centre of Seimas to discuss women’s rights and LGBT issues with activists and experts. Lithuania has met the equalities standards required for EU membership but remains a largely patriarchal society, one in which the church retains significant influence over social policy.

Prior to departing on Friday, the delegation had two fitting reminders of why maintenance of strong relationships between the UK and Lithuania remain so important. A tour of the parliament, complete with artefacts from January 1991, coupled with a visit to the KGB museum which left an indelible impression of the continuing vulnerability of this small but significant European partner for the UK. 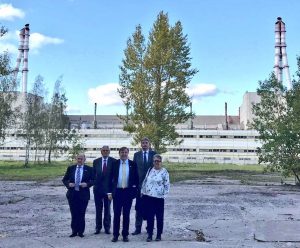 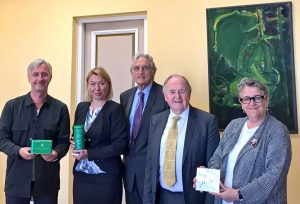 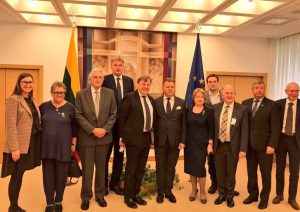