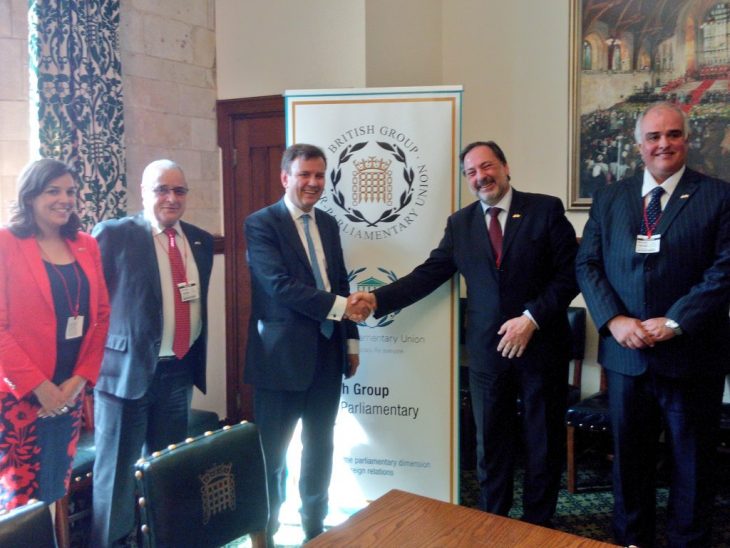 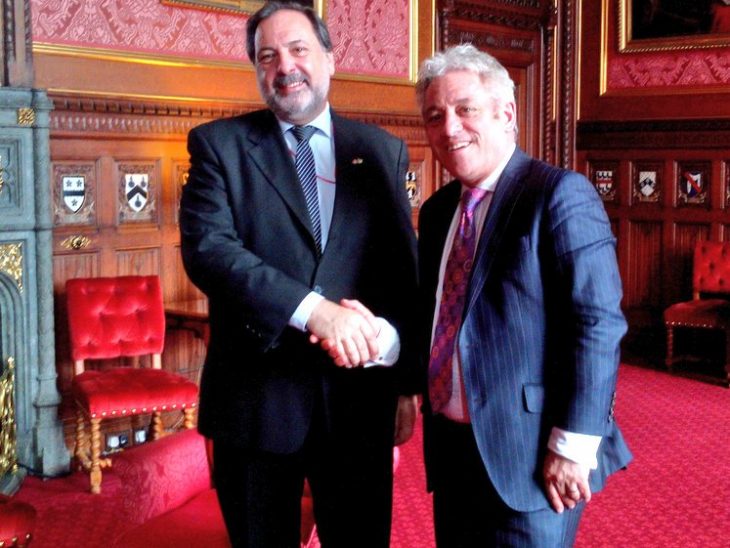 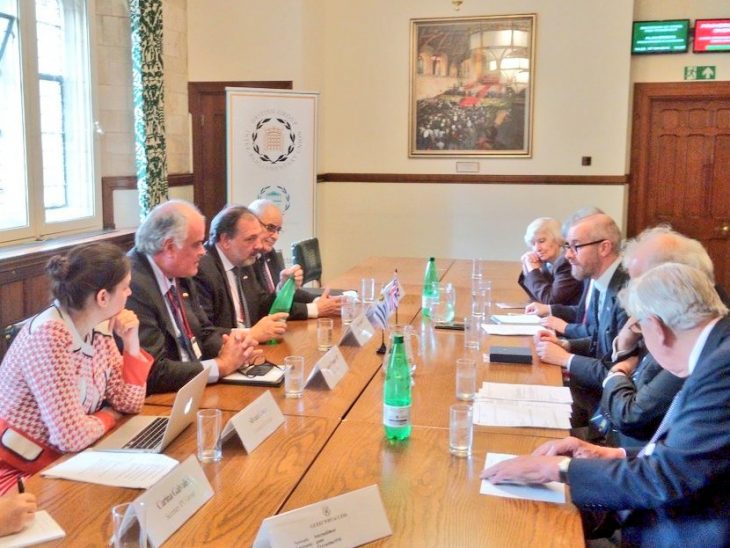 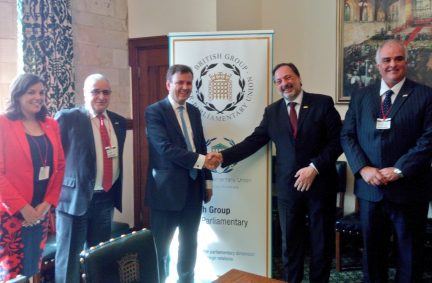 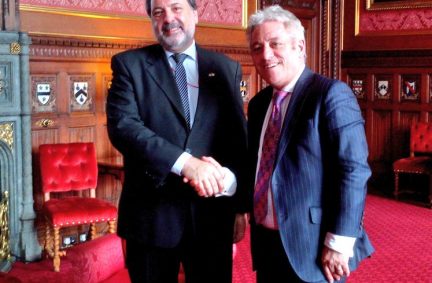 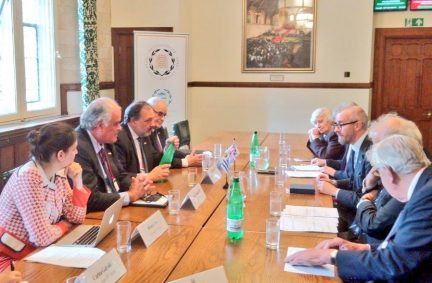 From 18th to 20th June BGIPU hosted the Speaker of the Uruguayan House of Representatives, Mr Jorge Gandini, for a 3 day programme in and around Westminster. Mr Gandini, who is a Member of the opposition National Party, was accompanied by his party colleague Mr Gustavo Penades MP and Mr Roberto Chiazzaro MP, Member of the ruling Frente Amplio Party, as well as Mr Oscar Piquinela and Ms Carina Glavalisi from the Uruguayan IPU Secretariat.

Mr Gandini had been part of a previous delegation, but given that in the Uruguayan Lower House the Speaker only serves a 1 year term and the role rotates every March, Mr Gandini used the opportunity to lead a delegation to London to receive an update on the current political situation in the UK, to strengthen bilateral relations and to discuss issues of mutual concern. The frequency of bilateral visits (the last BGIPU delegation visited Montevideo in the autumn of 2016 with the previous Uruguay Speaker visiting in January 2017) also underscores the close relationship both countries have within the Inter-Parliamentary Union, strengthened by the cordial relations between the two secretariats.

The programme kicked off on a sunny Monday with a visit to the Foreign and Commonwealth Office, where the Rt Hon. Sir Alan Duncan MP, Minister of State for Europe and the Americas, hosted the delegation for discussions on the bilateral relationship and regional as well as global issues, such as the crisis in Venezuela and shared perspectives about the Trump Administration in the United States. The Minister also candidly shared some insights into the Brexit process and related proceedings in Parliament during that week, including a round of votes on the EU Withdrawal Bill. The delegation then went to Westminster Abbey for a short tour, something that had been close to their heart and had not been feasible during the previous visit, and they were delighted to be able to see the most recent addition to the Abbey, the burial site of Professor Stephen Hawkins’ ashes. They were then met by the Rt Hon the Baroness Anelay DBE at Peers Entrance, who led them to Peers Dining Room for a Welcome Lunch attended by a number of Members form both Houses.

After lunch, the delegation watched the Lord Speakers Procession and subsequently went up the Gallery in the House of Lords Chamber to observe the proceedings and were fascinated by the stark difference between the self-regulating Peers and the more robust combative atmosphere of the Commons chamber. Heading back to the IPU Room, the delegation held talks with the Rt Hon Greg Hands MP, Minister of State for Trade Policy at the Department of International Trade, and it was clear that Uruguayan beef would play a significant role in future trade negotiations, including with regard to how the current EU quota would be allocated after Brexit.

As Mr Gandini has been a keen promoter of transparency in the Uruguayan Parliament, he and the delegation were then interested to hear from the Parliamentary Commissioner for Standards, Kathryn Stone OBE, about the code of conduct in the UK Parliament and exemplary cases of recent investigations the Commissioner had carried out. The day was rounded up by a reception at the Uruguayan residence, which included occasional cheers following the English football team scoring at the World Cup far away in Russia at the same time.

On Tuesday the delegation enjoyed a comprehensive tour of both Houses by Chris Bryant MP, who is not only one of the most knowledgeable people about the Palace of Westminster, but also delivered the tour in fluent Spanish.  Following the tour, Mr Gandini paid a courtesy call to exchange views and experiences with his counterpart, the Rt Hon John Bercow MP, Speaker of the House of Commons. The delegation was then hosted by Lord Purvis of Tweed, Member of the House of Lords’ International Relations Committee, for a working lunch in Parliament. Given his committee had just returned from a visit to Washington as part of their “Global Britain” enquiry, the wide-ranging conversation revolved around the politics of the Trump Administration, its global consequences and the overall state of geopolitics, including the impacts on Latin America. Other topics discussed included the crisis in Venezuela and the recent elections in Colombia. The debate continued during the following meeting with other members of the HOL IR Committee, and broadened into a comparison of parliamentary structures, in particular between the Uruguayan Senate and the House of Lords. UK Peers were astonished to learn that in Uruguay the highest judges were appointed by the Senate, and certainly left the meeting with some food for thought.

Wednesday started where meetings on Tuesday had left off, with discussions on Brexit, Venezuela and a range of other topics during a roundtable chaired by Mark Menzies MP, Chair of the Latin America APPG and as Trade Envoy to Colombia, Peru and Chile a frequent visitor to the region. The last highlight of the programme took the delegation up to the Special Gallery in the House of Commons chamber to observe Prime Minister’s Questions, the weekly sparring between the Opposition and the Prime Minister, that week dominated by questions on the future funding of the National Health Service. The delegation then went back to the hotel watch their country play against Saudi-Arabia at the World Cup just before heading to the airport and back to Uruguay.

It is fair to say that the visit reinforced the already close relationship between the two countries and shows how helpful and important regular personal contact is in the field of parliamentary diplomacy. This is especially important as the UK seeks to redefine its role in the world, is looking to strengthen trading relations and continue to nurture important friendships and alliances. 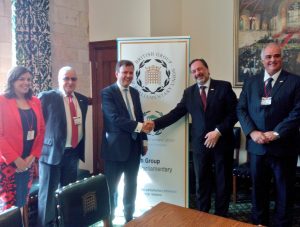 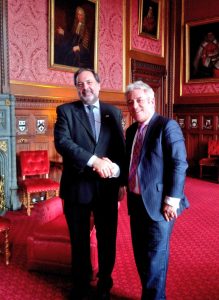 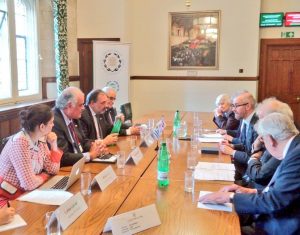