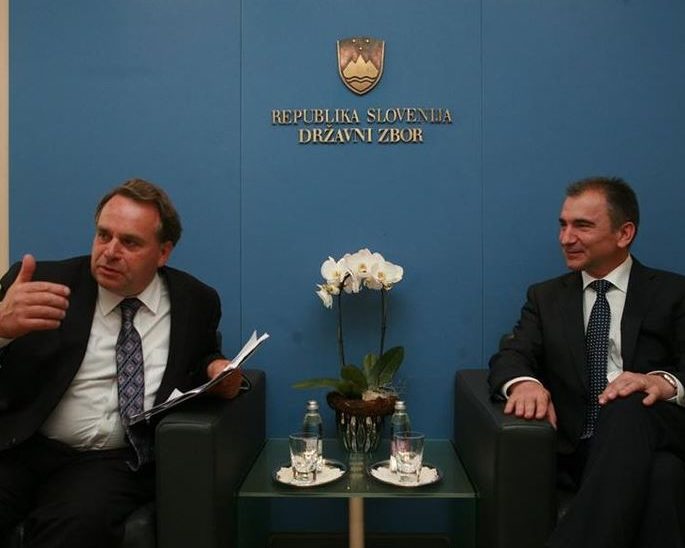 The group first enjoyed a working Dinner in the Strangers’ Dining Room in the Houses of Parliament with Neil Parish MP, Chairman of the British-Slovenia All Party Parliamentary Group, His Excellency Mr Iztok Jarc, the Slovenian Ambassador as wells as officials from the Slovenian Embassy.  Wednesday morning the delegation were given a tour of the Houses of Parliament and introduced to its history, heritage and its many customs that have survived over the centuries before watching Prime Minister’s Question Time from the Publc Gallery. After PMQs the delegation was taken for a group photograph outside of No. 10 Downing Street.

There was then a working Lunch with officers and members of the British-Slovenia All Party including Neil Parish MP, Sheryll Murray MP, Mark Pritchard MP, Nigel Evans MP and David Rutley MP, to share their experience of working in parliament. The MPs were joined by HE Iztok Jarc.

After lunch the delegation met with Members of the House of Lords who are members of the British-Slovenia All Party Parliamentary Group in the Lord Speaker’s Apartments, which was chaired by Lord Dubs, Vice-Chairman of the All-Party Group. The delegation was briefed on the history of the House of Lords, the role it plays in the legislative process and future plans for reform.

The delegation were then given a tour of the Speakers’ Apartments and had a coffee meeting with the Deputy Speaker, Nigel Evans MP, in his private rooms, to discuss the procedural role of Speaker and the Chairmen of Ways and Means.

The delegation and Members of the APPG then attended a Reception held at the Residence of His Excellency Iztok Jarc, the Slovenian Ambassador.

The visit was a great success, furthering strenghtening the relationship between two European democracies with very difficult political histories. The British-Slovenia All-Party Parliamentary Group would like to thank the Office of Neil Parish MP, the Ambassador and staff at the Embassy of the Republic of Slovenia, the Secretary of the Slovenian Parliamentary Friendship Group with Great Britain, the British Group of the Inter-Parliamentary Union and the Deputy Speaker Nigel Evans MP and staff for giving very freely of their time. 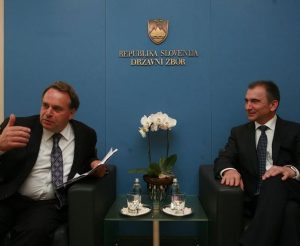