Women’s political leadership: Striving for a 50% balance in 2030 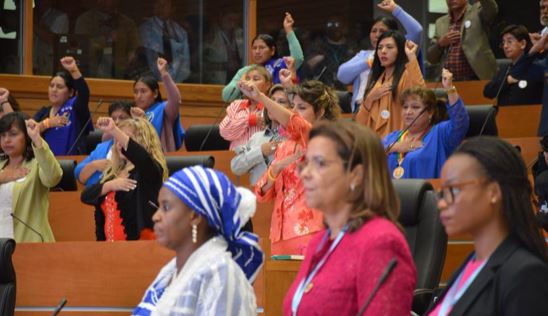 Women’s leadership and the equal participation of women and men in public affairs and decision-making are matters of human rights which are key elements of democracy and lasting peace, and prerequisites for achieving sustainable development. © Bolivian Parliament

Women’s leadership and the equal participation of women and men in public affairs and decision-making are matters of human rights which are key elements of democracy and lasting peace, and prerequisites for achieving sustainable development.

Our societies will not enjoy human rights, peace, sustainable and inclusive development, if they are not grounded in effective gender parity, if they do not benefit from women’s leadership and the empowerment of women and girls as expressly recommended by the Committee on the Elimination of Discrimination against Women (CEDAW Committee).

Since the adoption of the Universal Declaration of Human Rights, the United Nations Member States have demonstrated their political commitment to equal participation of women and men in public affairs and decision-making including by endorsing the Convention on the Elimination of All Forms of Discrimination against Women (CEDAW), the 1966 International Covenant on Civil and Political Rights, and the 1953 Convention on the Political Rights of Women.

Women’s participation and equal opportunities for leadership are at the center of the Member States commitments enshrined in the 2030 Agenda for Sustainable Development, in particular Goal 5. The Member States committed to “ensure women’s full and effective participation and equal opportunities for leadership at all levels of decision-making in political, economic and public life.” They also agreed to “adopt and strengthen sound policies and enforceable legislation for the promotion of gender equality and the empowerment of all women and girls at all levels.”

In its landmark resolution 1325 on women, peace and security, the United Nations Security Council stressed the importance of women’s equal participation and full involvement at all levels and in all efforts for the maintenance and promotion of peace and security.

The 1997 Universal Declaration on Democracy adopted by the Inter-Parliamentary Union states that “the achievement of democracy presupposes a genuine partnership between men and women in the conduct of the affairs of society”.

Significant progress has been made in terms of women’s political participation and leadership despite many difficulties and some setbacks. In 1995 the global proportion of women parliamentarians was 11.3 per cent and today, in a time of sweeping change and great challenges, it is 24.3 percent (plus 13 percentage points).

The 40th anniversary of the adoption of the CEDAW is a unique occasion to draw the world’s attention to this stark reality. No time to waste. We need to garner our collective strength and efforts to reach parity in political leadership by 2030.

As consistently repeated by the CEDAW Committee, Member States must as a matter of priority and in line with Goal 5 of the 2030 Agenda for Sustainable Development implement strategies that will truly advance parity in politics in close cooperation with civil society organizations. Such strategies would include:

.  Accelerating full compliance by States of their laws, rules and practices with international human rights obligations particularly in relation to the empowerment of women and young women.

.  Embedding gender parity in constitutions and legal frameworks, and setting out in the legal framework a 50 per cent women’s representation in parliament and government as an objective to be reached by 2030.

.  Adopting, reinforcing, implementing, and monitoring the necessary measures that have proved to be useful and successful in facilitating women’s access to elected office and to leadership positions, including electoral gender quotas.

.  Adopting legislation and policies to eliminate all forms of violence against women in politics and implementing capacity-building programmes for women activists, candidates, politicians and parliamentarians.

.  Promoting new media strategies, including through social media, that promote women’s leadership and gender equality and that eliminate gender stereotypes.

.  Having or reinforcing a gender equality perspective in education policies and all civic education activities for women and girls, and working towards closing the gender gap in educational opportunities, and bridging the digital divide. 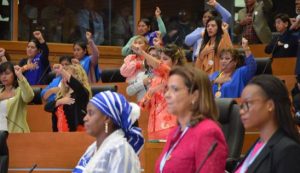 Women’s leadership and the equal participation of women and men in public affairs and decision-making are matters of human rights which are key elements of democracy and lasting peace, and prerequisites for achieving sustainable development. © Bolivian Parliament