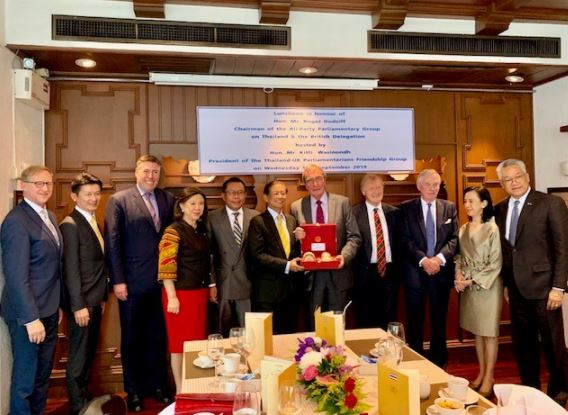 During 17 -20 September 2019, the Thailand All Party Parliamentary Group (APPG) visited Bangkok, Thailand, at the invitation of the Royal Thai Embassy.

During 17 -20 September 2019, the Thailand All Party Parliamentary Group (APPG) visited Bangkok, Thailand, at the invitation of the Royal Thai Embassy. Roger Godsiff MP, Chair of the APPG, led a delegation of UK parliamentarians which included Sir Graham Brady MP, Sir David Amess MP, and Lord Astor of Hever. The visit was organised as part of the Royal Thai Embassy’s initiative to demonstrate Thailand’s potentials for the UK’s legislative members in order to keep them updated of Thailand’s latest developments, and to generate ideas of future cooperation. Ambassador Pisanu Suvanajata, Thailand’s Ambassador to the United Kingdom, led the Group’s visit over the course of a 2-day programme in and around Bangkok. Given the political situation in the UK, Brexit and its implications were amongst the main talking points between the Group and representatives from the Thai government and business sectors throughout the various meetings. This was the second visit to Thailand by the APPG, with the last visit taking place 10 – 15 November 2014.

On 18 September, the Delegation commenced with a morning meeting with H.E. Mrs. Pornpimol Kanchanalak, Advisor to the Minister of Foreign Affairs. Mrs. Kanchanalak and the Group discussed the importance of the UK preparing a Free Trade Agreement with Thailand after Brexit. Mrs. Kanchanalak encouraged increased cooperation as the message to bring back to the United Kingdom’s Foreign Office.

The next meeting was a working lunch with the “Thailand – United Kingdom Parliamentarians Friendship Group,” Thailand’s counterpart to the British Thailand APPG. H.E. Brian John Davidson, the UK Ambassador to Thailand, was also in attendance. During the lunch, the group discussed bilateral relations between the United Kingdom and Thailand. The Friendship Group hopes to visit the UK in Spring 2020, which would coincide with the 165th anniversary of diplomatic relations between Thailand and the United Kingdom.

Following the lunch, the group was welcomed by H.E. Dr Uttama Saowanayana, Minister of Finance, on behalf of the Thai Prime Minister at the new House of Parliament, which was recently opened in May 2019. Minister Saowanayana spoke of Thailand’s fiscally strong position over the past 5 years and the governments’ regional priorities, infrastructure projects, and bilateral opportunities with the United Kingdom.

The delegation was then joined by the President of the National Assembly of Thailand and the Speaker of the Thai House of Representatives, H.E. Chuan Leekpai, who previously served as Prime Minister of Thailand. He gifted the APPG a book containing a collection of his illustrated artwork and sketches, which the Group very much enjoyed.

The day ended with a meeting with Thai business executives followed by a networking dinner hosted by Mr. Thapana Sirivadhanabhakdi, President and CEO of Thai Beverage Public Company Limited, on the capacity of the Co-chair of the Thailand – UK Business Leadership Council (TUBLC). Participants at the dinner represented various Thai businesses who were interested in discussing economic opportunities and challenges following Brexit.

On the second day of the programme, 19 September, the delegation joined Ambassador Pisanu for a site visit of the Eastern Economic Corridor (EEC). The first stop was Laem Chabang Port, which is a deep-sea port in Thailand and exemplifies the logistical infrastructure achievements of the region as well as the vision for expansion to improve connection and trade in Thailand, the ASEAN region, and global markets. Afterwards, site visits to Senior Aerospace (Thailand) Ltd., and Triumph Motorcycle (Thailand) Ltd., demonstrated the success of leading UK companies in Thailand and the potential for others located in Thailand’s geographical gateway.

The Delegation concluded with a working dinner with the British Embassy, hosted by the British Ambassador H.E. Brian John Davidson. Joining the dinner was also Rt Hon Heather Wheeler MP, Minister for Asia and the Pacific, who was on a separate visit to Thailand on behalf of the Foreign Commonwealth Office.

Overall, the Group achieved a great deal over the course of 2 days and is encouraged by the prospect of further cooperation and trade between Thailand and the United Kingdom following Brexit. 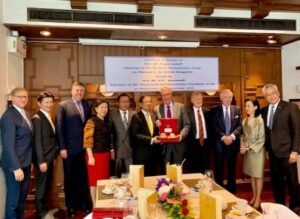 During 17 -20 September 2019, the Thailand All Party Parliamentary Group (APPG) visited Bangkok, Thailand, at the invitation of the Royal Thai Embassy.