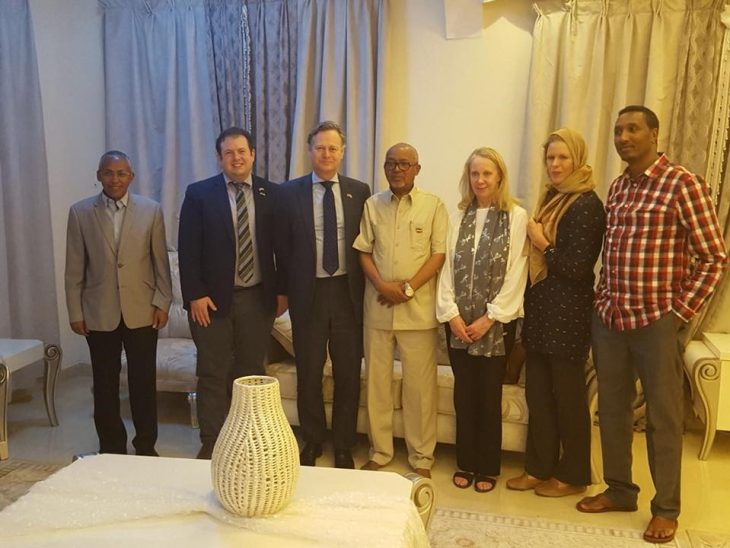 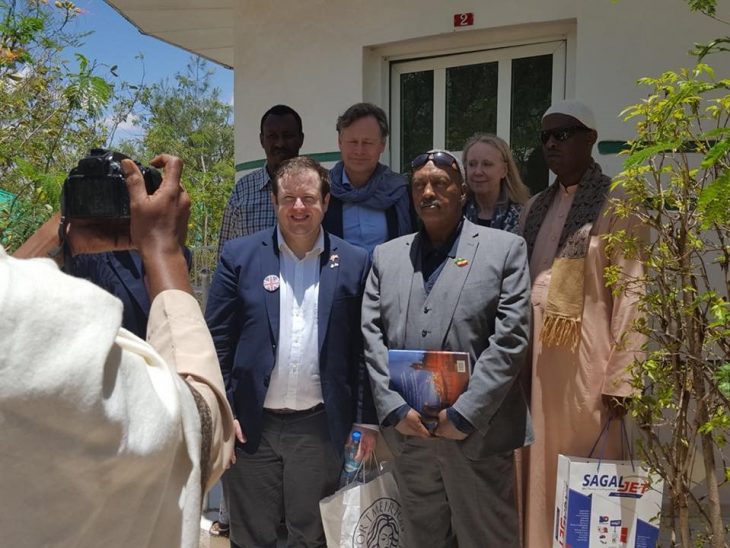 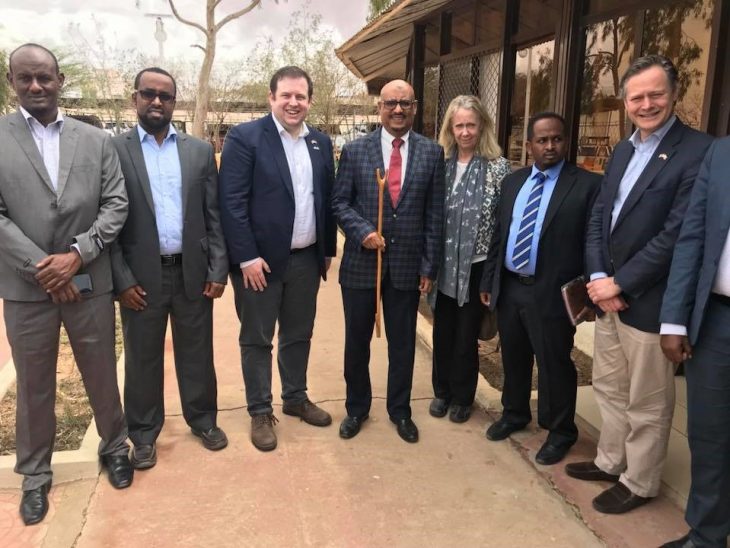 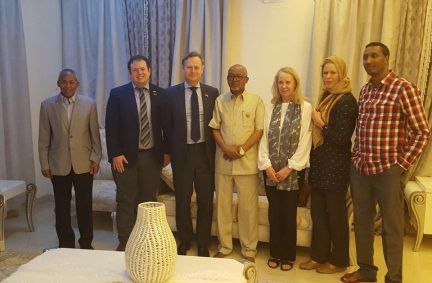 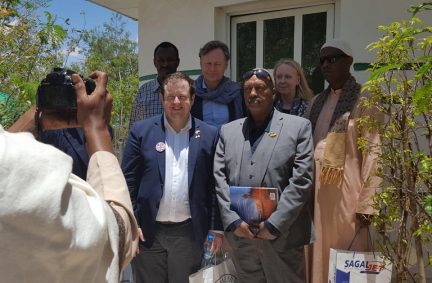 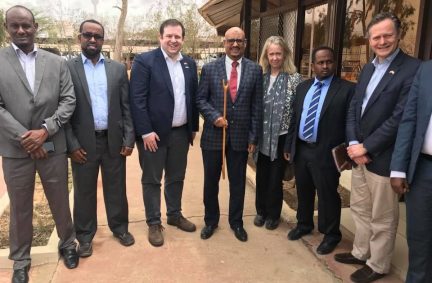 The APPG’s delegation landed in Hargeisa, the capital of Somaliland mid-afternoon following flights from Heathrow via Addis Ababa. We were greeted by the Foreign Minister, Dr Saad Ali Shire, who we had welcomed to the UK back in January, where we discussed the legal status of Somaliland and the state of current talks between Somaliland and Somalia being facilitated by the Turkish Government.
Working with Somaliland institutions to promote peace and democratic progress.

The delegation was fortunate enough to be invited for dinner with the newly re-elected Vice-President of Somaliland. We congratulated him on his success, reinforced the link between democratic process and economic development for the country and discussed how improvements to the media atmosphere and electoral system could be made in advance of next year’s general election. We also discussed the positive impact that UK aid and the FCO/DFID presence in Somaliland has on the country, its people and the region more widely. The delegation also met with the Interior Minister and the Chief of Police to discuss the security challenges facing Somaliland.

Thursday morning was spent with representatives of the Somaliland National Electoral Commission and the leaders of Somaliland’s opposition parties. The delegation praised the largely peaceful nature of last year’s presidential elections and encouraged party leaders to continue to use official, established and transparent processes to address grievances and alleged inconsistencies within the democratic process. The delegation also discussed preparations for the upcoming 2019 parliamentary and local elections and the role of the UK in ensuring transparent and successful elections with over 400 candidates. Despite being unable to visit the physical Parliament buildings due to security concerns, we met delegations of senior parliamentarians from both the lower and upper houses including the Speaker of the House of Representatives and the Chairman of the Foreign Affairs Committee in the Guurti (Upper House). Our discussions focused around the desire in Somaliland to work in close cooperation with the UK Government, the APPG and the IPU to strengthen democratic processes and institutions as well as promote the role of women in parliament and politics more broadly.

The delegation also met with young Somalilanders, both those that are being trained as journalists through UK aid-funded projects at the University in Somaliland and others that contribute to Somaliland civil society. The evening’s programme was hosted by the Minister for Trade and Investment where we met with Somaliland businesspeople to discuss inward investment to Somaliland and the growing infrastructure in the port at Berbera. We also met with civil society groups and British-Somalilanders who raised challenges surrounding increasing trade and investment without a permanent UK consulate in Hargeisa.

The trip was rounded off with a visit to the Edna Adan Hospital which focuses on providing better health care to people whose lives have been traumatized by war, and also to provide training for nurses, midwives, and other health workers. On our return to the UK, we were pleased to hear news that the Somaliland Upper House, the Guurti, had agreed legislation criminalising sexual assault and gender-based violence, an issue we specifically discussed.

HM Government should support recognition of Somaliland through the UN.  Over the past 27 years since declaring independence, Somalilanders have built a peaceful, stable and democratic independent state, including a multi-party political system with three presidential elections and a parliamentary election, a constitution, legislature and judiciary. The consequences of the international community failing to recognise Somaliland as an independent autonomous sovereign country is to deny it financial and economic opportunities as well as ignoring wider strategic interests for the UK in the region.

While the Independent Electoral Observation Mission said that ‘throughout the election period, Somalilanders demonstrated their support for the rule of law and constitutional process, voting peacefully and in significant numbers’, it is clear that some concerns remain in parts of the Somaliland political system, particularly the issue of lack of women in parliament and politics. The UK and the IPU could provide vital supportto strengthen and reinforce democratic processes, institutions, role and place of women, the media and freedom of expression.

The most pressing concern we heard from Somaliland diaspora, many of whom have maintained their British/joint citizenship, is that in order to renew their passports and access other consulate service they either have to return to the United Kingdom or travel to offices in Djibouti, Ethiopia or Somalia. We recommend the UK Government should upgrade these services in Hargeisa.

UK aid has made a significant difference, but it has not always been clear the proportion of aid that is assigned to Somalia versus Somaliland through multilateral organisations. Somaliland’s $442m port project in Berbera will provide not only great benefits for the country in imports and exports to the country but will establish Somaliland as a regional trading and maritime hub and create a container terminal with a capacity to handle up to 1.25 million TEUs a year. This will not only be an incredible opportunity for the country but also provide significant opportunities for trade throughout the East African region. UK support for this initiative would be a great opportunity to achieve influence, provide a boost for Somaliland and provides opportunities for UK-Somaliland investment.

Reciprocal arrangements between police services, particularly the Metropolitan Police, and police and security services in Somaliland

Collaboration between the Somaliland police service, South Wales Police and other security and police forces in the UK already exists. This should be considered at a more national and regional level systematically through further collaboration. Somaliland is a strategic location for the United Kingdom in the region and our presence is not only welcomed but can become a real asset for the UK Government and Somaliland, given the threats posed by piracy and extremists groups in the region.

The APPG is enormously grateful to all those involved in making the trip such as success. Special thanks must go to the BGIPU for agreeing to fund the trip, the Government of Somaliland for developing the agenda and facilitating the travel to Somaliland and meetings during the visit, and the FCO for their extensive facilitation including security and logistical support during our visit. The APPG would also like to extend its thanks to the people of Somaliland for their time and generosity during our visit, which while short was productive and welcomed on all sides. 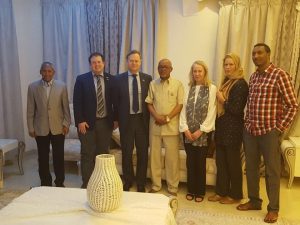 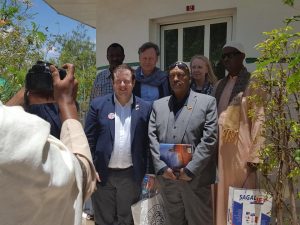 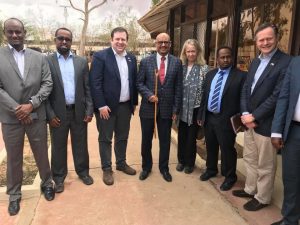