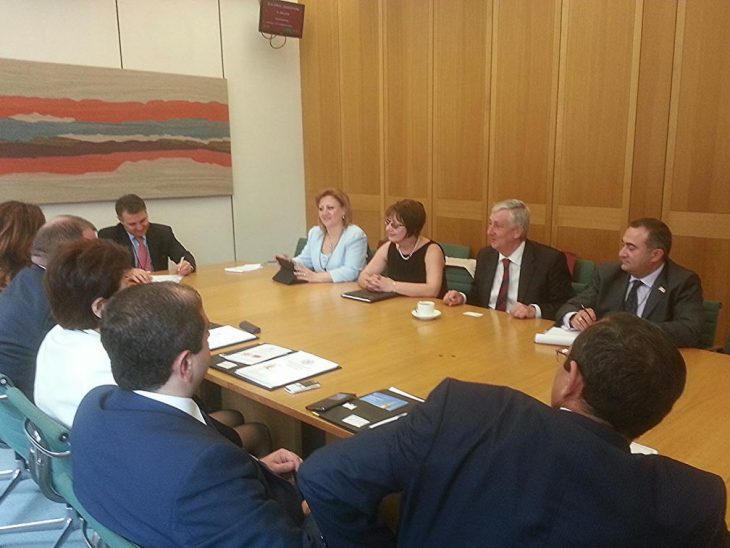 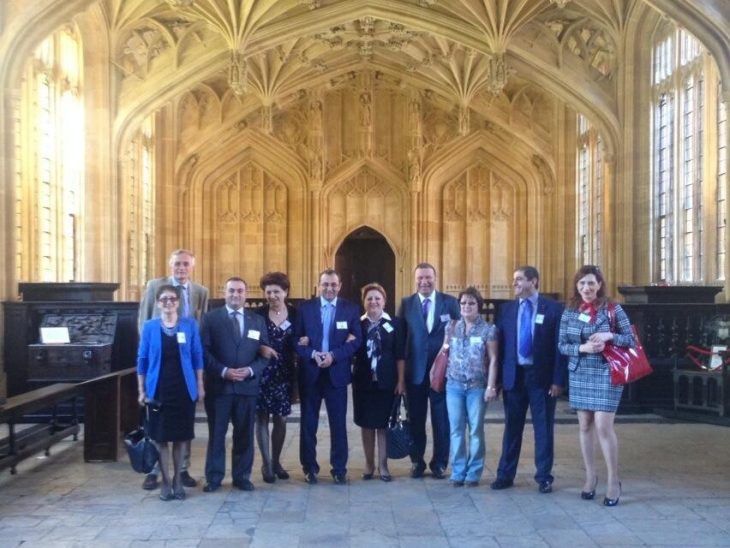 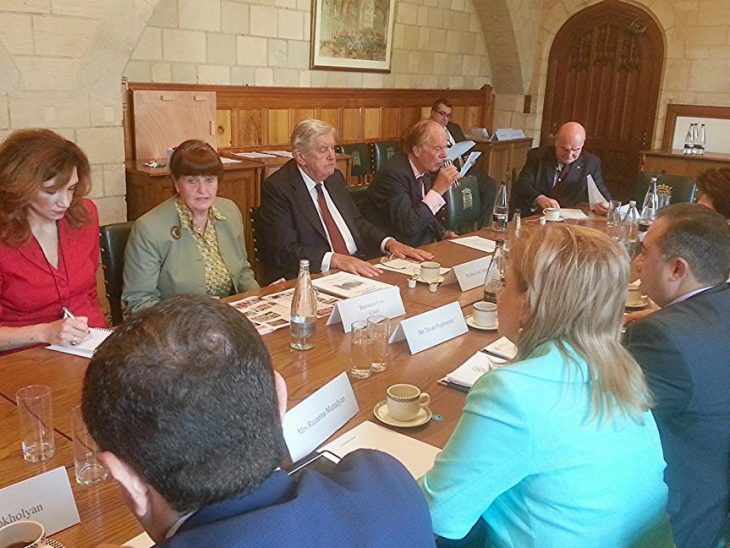 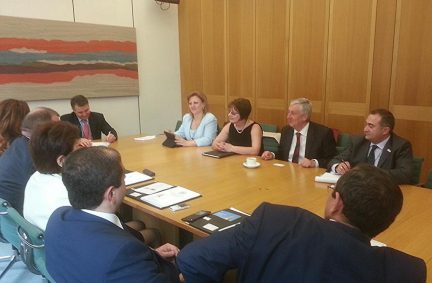 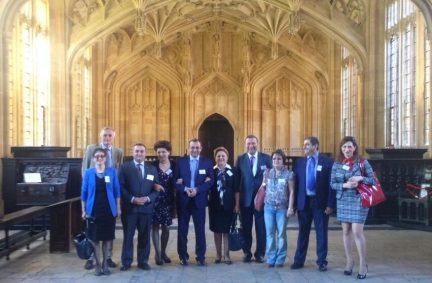 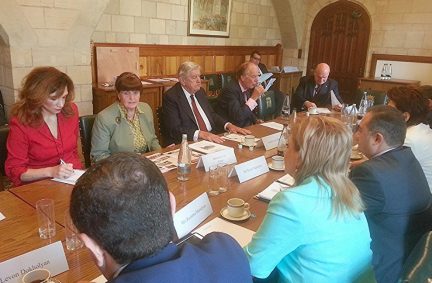 The visit commenced on 7 July with an introductory briefing on the operations of the Houses of Parliament and a meeting with staff of the Scrutiny Unit of the House of Commons. The delegation were interested in the scrutiny and oversight role of Select Committees with a key focus on Parliament’s role of holding Government Departments to account and reviewing policy implementation. The UK Parliament’s role in holding Government Ministers and Departments to account was highlighted in a number of the delegation’s subsequent meetings with Deputy Speaker and Chairman of Ways and Means, Rt Hon Lindsay Hoyle MP, officials of the Education Select Committee and members of the Foreign Affairs Committee, Mike Gapes MP and Nadhim Zahawi MP. The delegation also had an opportunity to see Prime Minister’s Question Time later in the week and were interested in the procedures and political dynamics of the session, including the cut and thrust of questions put to the Prime Minister on the floor of the House of Commons.

A working lunch hosted by Lord Faulkner gave the delegation an opportunity to meet with a range of peace and security related non-governments organisations (NGOs) working on conflict resolution and related issues. The Armenian delegation highlighted that the country was keen to pursue economic development for its population but the conflict in Nagorno-Karabakh was a serious obstacle to its ambitions as it undermined Armenia’s reputation and attractiveness for long-term investment. In discussions with NGOs, the delegation noted that combative relations with Azerbaijan and Turkey over long-standing issues affected international perceptions of Armenia making its important to resolve the Nagorno-Karabakh conflict and secure more cordial relations with Turkey as a matter of priority.

The delegation acknowledged that both issues were complicated and reflected long-standing differences which required significant good-will and a willingness to understand each other’s perspectives on all sides. In the case of Nagorno-Karabakh, it was important to bring about de-escalation of the security situation along the line of control where snipers continued to cause Armenian casualties and destabilize ongoing peace efforts. The delegation underscored Armenia’s key objective was to resolve such issues through dialogue and peaceful means. A key requirement was for negotiations to focus on the aspirations of the Karabahki people who had made clear their desire for self-determination meaning they must play a key role in negotiations with Azerbaijan. Despite Azerbaijan’s efforts to paint this as a bilateral conflict with Armenia, resolution lay in Azerbaijan coming up with a solution which served the aspirations of all the people of the region.

The delegation also noted that relations with Turkey would be prominent in 2015 on the occasion of the 100th anniversary of the Armenian genocide and there was a need for Turkey to acknowledge past actions and take positive steps to seek improved relations with Armenia for the future. The fact that Armenia’s border with Turkey was closed remained a significant impediment to economic and trade development for the country. The role of women in peace and security issues in Armenia, in addition to the role of women more broadly in the country, was subsequently discussed with Baroness Hodgson of Abinger in her capacity as Chair of the Women, Peace and Security APPG.

The delegation’s perspectives on the conflict in Nagorno-Karabakh also featured in discussions with the UK’s delegation to the Parliamentary Assembly of the Council of Europe (PACE) chaired by Robert Walter MP. Some UK delegates noted that continuing tensions and procedural moves by Armenia and Azerbaijan against each other in fora such as PACE were ultimately counter-productive and futile as PACE was not the place where such bilateral tensions were likely to be resolved. The Armenian side acknowledged this but said it could not just ignore provocations in the course of international meetings but agreed bilateral dialogue remained key to resolving long-standing differences. Armenia obviously valued cooperation with European partners and sought to expand economic links, including with the UK, in the interests of broader national development.

In light of these desires, the UK participants asked for the delegation’s views on the recent decision by the Armenian Government to turn away from the EU’s Eastern Partnership and instead express interest in joining the Russia-backed Eurasian Economic Union. The delegation said this should not be seen as a zero-sum game as many in the West were seeing it. Armenia was a small nation and its decisions must, at all times, reflect its core national interests. This decision was based on the reality on the ground of high levels of Russian capital investment in the country, historic links and existing trade and economic relations in the countries of the former Soviet Union. This didn’t stop Armenia also pursuing expanded trade and economic relations with European Union members over time but Russia had pressed its case and offered a better deal for Armenia at this point in the process. Armenia did not feel it was being forced to choose one way of the other and as a small state, it remained keen to keep all its options on the table while acting in the nation’s best interest.

UK participants also asked about Armenia’s position on the recent UN vote concerning the international community’s respect for the territorial integrity of Ukraine where Armenia had voted with Russia and a small number of other countries. The Armenian side noted that UN votes highlighting territorial integrity matters could be problematic for Armenia given the question of Nagorno-Karabakh and it ultimately had to reflect a long-standing national position based on the total range of its interests. Other countries needed to look past simplistic and narrow geo-political divisions and understand Armenia’s position on such issues, including support offered to Russia in the UN or Armenia’s intention to join the Eurasian Economic Union, based on all the factors, not just narrow interpretations.

The third day of the visit commenced with a detailed exchange between the delegation and UK counterparts through a roundtable discussions chaired by the most recent Chair of the Armenia APPG, Baroness Cox. The Armenian side noted the important role Baroness Cox had made in advancing Armenia-UK relations with over 80 visit to the country and significant efforts to help those people most affected by the Armenian earthquake in 1988 which caused widespread damage and severe loss of life in the country. The delegation spoke again about the challenges facing Armenia, particularly the need to develop its economy and attract foreign investment, including from the UK. As earlier noted, resolution of frozen conflicts and reducing tensions with neighbouring countries was a key part of this overall strategy to make the country a more attractive destination for investment. Armenia also appreciated that it needed to develop new economic infrastructure in key sectors such as transport, energy and mining. Strong trade and bilateral relations with Iran was also a key advantage for Armenia, as was the prominence of the Armenian diaspora in a number of countries, particularly throughout Europe, including the UK, and in the US.

Following a working lunch chaired by the newly appointed Chair of the Armenian APPG, John Whittingdale, the delegation also met with FCO spokesman in the House of Lords, Lord Wallace of Saltaire. The Armenian delegation noted its gratitude to the BGIPU for the opportunity to meet with their British counterparts. A key objective had been to dispel some myths about Armenia’s recent choices and future direction and they wished to underscore that all political parties in Armenia remained committed to creating a European democracy and continuing reforms towards European standards. They also discussed with APPG members, how it might be able to assist in raising awareness of Armenia’s plans to commemorate the 100th anniversary of the Armenian genocide in the UK Parliament. During this meeting, the APPG Chair confirmed that Baroness Cox would be the Life President of the APPG in recognition of her significant contribution to Armenia-UK relations.

Following the programme in Westminster the delegation then travelled to Oxford, where they were met by Professor Theo Van Lint, Calouste Gulbenkian Professor of Armenian Studies and Fellow Of Pembroke College who arranged for the delegation to examine some of the department’s collection of Armenian manuscripts which will form part of an exhibition in the new wing of the Bodleian Library in October 2015 and met with representative of the Oxford-Armenian Society and Choir at Pembroke College. The delegation also met with the Deputy Dean of the Saïd Business School, Professor Roy Westbrook to discuss Executive and MBA programmes offered at the University and the format of these programmes.

Finally, on 11 July, the delegation travelled to the constituency of Reading West to meet with Alok Sharma MP in his Tilehurst office to learn more about the role of an MP as a constituency representative and how they interact with government on their behalf. Mr Sharma also discussed constituency’s vibrant business community, and the delegation were able to meet with representatives of this community and UKTI to discuss trade and opportunities for increased cooperation. Returning to London, the delegation paid a visit to St Sarkis Armenian Church prior to a reception hosted by the Armenian Ambassador, H.E. Mr Armen Sarkissian, at the St Yeghiche Armenian Church Hall in Cranley Gardens, including members of London’s Armenian Community, FCO officials and UK parliamentarians, including Baroness Cox.

This visit reciprocated a visit by BGIPU to Armenia in February 2014 reported here. 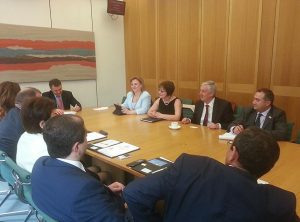 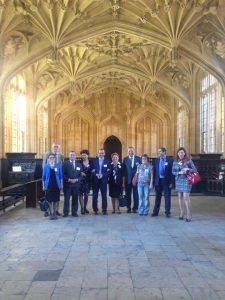 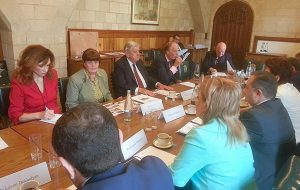