Home » Activity Reports » Back to basics: Connecting Politics and Trade, 2012 session of the Parliamentary Conference on the WTO

Back to basics: Connecting Politics and Trade, 2012 session of the Parliamentary Conference on the WTO 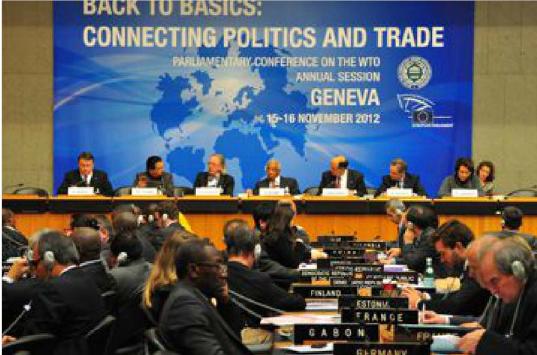 The annual 2012 session of the Parliamentary Conference on the WTO was held in Geneva on 15-16 November 2012.

The annual 2012 session of the Parliamentary Conference on the WTO was held in Geneva on 15-16 November 2012. An interactive debate with exceptional speakers took place on the following issues: Trade as a tool of economic growth, job creation and poverty alleviation; Analysing 21st century trade challenges; Trade in services: time for political decisions.

Baroness Hooper and I attended these fascinating and timely conferences on behalf of the British Group of the IPU. I had also attended the preparatory September IPU meeting in Geneva.

Prior to the pre-conference steering committee and conference proper, our first meeting involved a breakfast briefing from UK Mission Rep, Ambassador Karen Pierce and her equally excellent Second Secretary Kebur Azbaha on major issues facing the WTO. We were advised that key elements to take into account were the overall approaches of China and India; that global trade dynamics would be affected by the levels of engagement (or lack of) from Russia and the US and that the contest to replace the outgoing and outstanding Pascal Lamy as WTO Chief would be of crucial importance to the WTO addressing its difficult agenda into the future.

Baroness Hooper and I vigorously supported the patient and skilful Canadian Senator Donald Oliver find consensus amongst the IPU Steering Committee delegates, charged with drafting the Outcomes Declaration for the close of conference. Disputants to the original text included India, who were (and remained so at the end of the conference) reluctant to accept the necessity of responding to environmental concerns by acknowledging Climate Change obligations within Trade agreements. They argued that such environmental considerations were the responsibility of other established World organisations.

This argument was subsequently questioned by WTO Secretary General Pascal Lamy who pointed out (albeit as a mere administrator) the absence of any such global environmental organisation, performing the equivalent task of, say, the ILO in presiding over labour considerations in trade. It was indeed later intimated that part of the WTO’s new initiatives, coming from the Lamy-appointed Twelve Wise People Group, was that the WTO should indeed shoulder some responsibilities in the field of Climate Change in the absence of any Rio type, proposed Accord.

The Chinese delegation in the IPU deliberations, on the other hand, was adamant that it would not entertain the mention of “exchange rate instability” as a major trade determinant or culprit creating current financial instability. Their obdurateness to what they felt to be a less-than-oblique criticism of China itself led to adoption of a more nuanced reference to “rebalancing the world’s financial sector.”

The Declaration’s rapporteur was Burkina Faso’s Benoit Ouattara. He was aided by an old colleague of mine, Austria’s Paul Rubig from the European Parliament. Paul’s constant theme was the importance of small businesses in the facilitation of trade that the WTO seeks to achieve amongst trading nations.

Separate mention should also be made of the European Parliament’s effective lobbying (moving amendments to the text) and valuable contributions to the text, as well as their coordinating role in agreeing the final text. While there were some internal political differences within the delegation, they largely acted as a single cohesive unit with common objectives (with participation of British MEPs from the Coalition). They also co-hosted the Parliamentary Conference as a whole, a measure of the EP’s growing influence on the world parliamentary stage (an influence not lost on us as former members of the European Parliament).

The final Conference text was a reiteration of familiar ambitions. It ringingly echoes the certainties of the American Declaration of Independence: “We are firmly convinced of the enduring value of multilateralism”. Many of the subsequent exchanges, amongst the gathered parliamentarians, sought to shore up that noble aim which had, in the wake of the failure of the Doha Round, been undermined by the increasing incidence of bilateral (especially true of the European Union) solutions and more menacingly by the number of plurilateral deals that appear as a response to the frustration of countries who want to get on and open markets by agreeing trade opening deals with like-minded partners.
The Parliamentary Conference remained true to multilateralism, but siren voices supported interim deals of a bilateral or plurilateral nature as paths leading to the same ultimate, multilateral conclusion.

The Parliamentary Conference was blessed with some exceptional speakers, leading sessions on: Trade as a tool of economic growth, job creation and poverty alleviation; Analysing 21st century trade challenges; Trade in services: time for political decisions. Chairman Donald Oliver praised the role of the WTO, through Pascal Lamy, in promoting Parliamentary oversight of the WTO, in co-hosting the conference (with the European Parliament) in the House of Trade. He reminded us that the WTO holds some 8,000 meetings a year in the House of Trade. This meeting of some 300 politicians from some 70 countries was just one, albeit an important one.

Marion Jansen, a WTO Counsellor, highlighted the lack of Labour mobility and the fact that the highly-educated were found in the ranks of the unemployed, despite education being the passport to labour mobility. Paul Rubig affirmed that countries remained at peace where poverty was reduced and education spread. That helping SMEs flourish also helped women in less developed societies develop their own innate, entrepreneurial habits.

Sharan Burrow, ITUC Secretary-General, gave a characteristic, plain-speaking address, berating the 5-10 developed countries who repudiated the setting of a global floor on labour standards within global trade deals. She cited the deplorable lack of decent labour standards for workers currently erecting football stadia in Qatar, in advance of the 2022 World Cup. Indeed, she attributed a lack of forceful leadership to secure labour rights in the 3 trillion dollars’ worth of transactions in the financial sector, 86% of which omitted any form of social protection for workers.

The European Union came under criticism for its non-tariff barriers deflecting trade with poorer nations (my Ugandan neighbour chose me as a target of such criticism!). The refusal of the EU to import certain nuts into the EU on the grounds that one constituent element
of the nuts potentially offered a risk to one half of one consumer in the 450 million single market was cited as a representative example of such barriers to trade.

One Indian speaker asserted that 9/11 caused the “world to go into an off-spin” in global trade. (England wickets were tumbling in the first Test Match against India at that very moment!) He further bemoaned the subsequent slow-down in the world trade. A Haitian parliamentarian passionately painted his country’s sad fate as trade slowed following the 2010 devastating earthquake. A Chilean MP demanded that global trade should focus on people not money. The irony of these exchanges being conducted in
Switzerland was not lost on all!

CUTS International Secretary-General, Pradeep Mehta, underscored the absence of any US Congressman from our discussions (perhaps excusable in the aftermath of US Elections) and asserted that Trade Issues have moved decisively from West to East.

In the Panel session highlighting the new primacy of Services as the motor of trade, a speaker characterised this new reality by declaring “Services are the Higgs Bosun particle of World Trade”, an apt metaphor in Geneva! He expanded, “Services are the soul of world trade. And traded goods are at the heart of services!” A later speaker thoughtfully opined that “50% of services over the next few years have yet to be invented” – an arresting thought.

A masterclass from Pascal Lamy was the highlight of the Conference. His successor will indeed have a hard act to follow. He responded positively to the assembled parliamentarians before him and to the universal appeal for trade to be identified and maximised as a source of quality jobs during the coming years of persistent financial instability and jobless growth.
Baroness Gloria Hooper and I pondered how the central message of the conference of bringing together the worlds of politics and trade might be better promoted.

The final Panel contained exceptional presentations from an Italian MEP and the Swedish Ambassador to WTO, Mexico’s permanent WTO Rep and the refreshing voice of business in Pascal Kerneis, MD of the European Services Forum. They and Anders B Johnsson, IPU Secretary General, replied positively to my intervention asking for a sharing of best practice amongst parliamentarians on promoting political scrutiny of executive decisions on trade in our respective parliaments. Indeed, the Secretary General undertook to respond at a later date to my specific demand.

I enjoyed, learnt and profited from the Conference in both its formal and informal engagement and Baroness Hooper and I are both determined to take up the mantle of examining our own Parliament’s democratic engagement with trade issues. That trade is a potential source of economic revival and renewal requires political initiative in which the IPU can play a pivotal part.

The Outcome document of the conference is available here and more information is available on the IPU website. 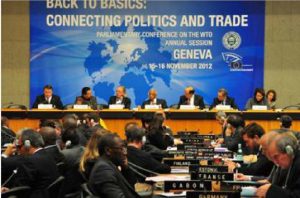 The annual 2012 session of the Parliamentary Conference on the WTO was held in Geneva on 15-16 November 2012.