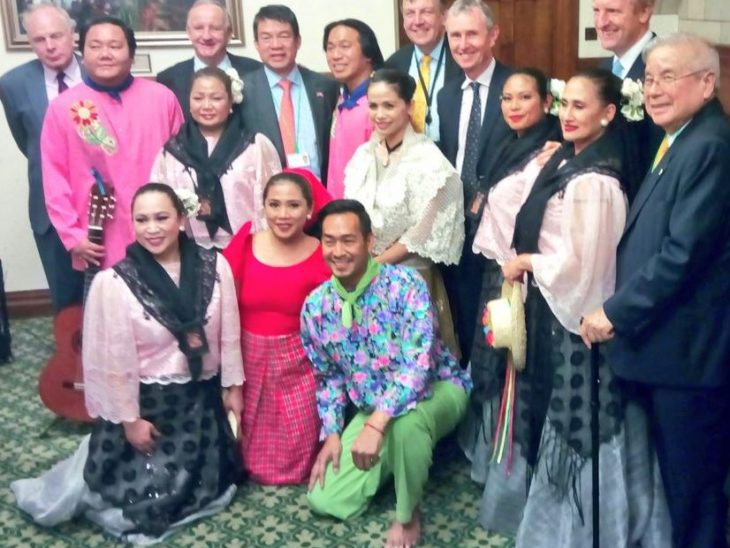 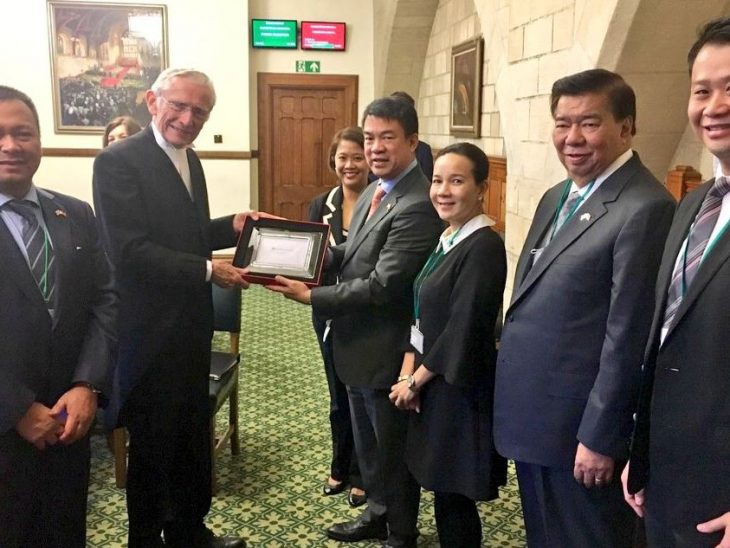 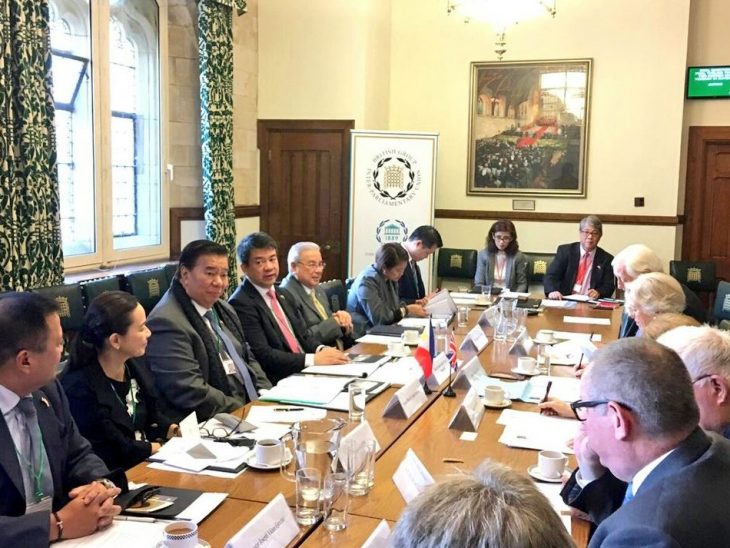 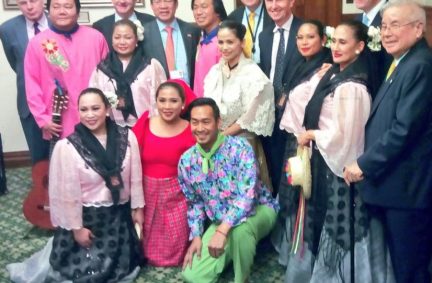 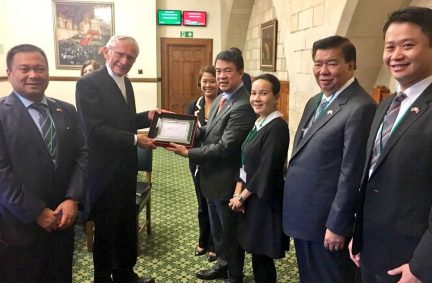 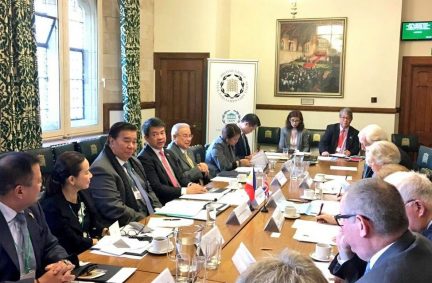 The delegation’s formal parliamentary programme began with a welcome from Serjeant at Arms Kamal El-Hajji BEM, followed by a brief introduction to parliament and the Westminster system from Matthew Hamlyn, Head of the Overseas Office. The delegation then met with House of Commons Speaker, the Rt Hon John Bercow MP, where both sides expressed strong enthusiasm for strengthening the diplomatic ties and relationship between the two countries. Senate President Pimentel was then invited to sit in on the Speaker’s coordination meeting where matters expected to arise throughout the week in the Chamber were discussed providing him a unique insight into the inner workings of the UK Parliament.

Monday’s lunch was hosted by Sir David Amess MP, Chair of the All Party Parliamentary Group on the Philippines, and members had an opportunity to discuss last year’s delegation to the Philippines and the outcomes that had been actioned following the visit. Issues relating to healthcare accreditation in the Philippines, potential post-federalism constitutional changes and tourism exchanges arose, with Sir David welcoming any written correspondence on these matters that he could pass on to the relevant Ministers.

The afternoon saw the delegation meet with the Chairman of Ways and Means and Deputy Speaker, Rt Hon Lindsay Hoyle MP, where the group discussed the current economic climate in the Philippines and the Filipino labour force working in the UK. The subsequent meeting with the Lord Speaker, Rt Hon the Lord Fowler, provided a good opportunity to explore the House of Lords role in legislation and how political stalemate was avoided between the two houses.

The day’s formal meetings concluded with discussions with the Chair of the International Development Committee, Stephen Twigg MP, and members Pauline Latham MP and Chris Law MP. The current detainment of Senator de Lima in the Philippines, post-typhoon Haiyan recovery and the former ISIS control of the Filipino city of Marawi were all raised. Monday’s programme closed with a Welcome Reception hosted by BGIPU Chair Nigel Evans MP, with members invited to watch traditional Filipino dancing and try artisanal produce from the country.

Tuesday morning began with an engaging tour of Parliament led by Steve Pound MP and a meeting with Richard Graham MP, Trade Envoy to Indonesia, ASEAN Economic Community (AEC), Philippines and Malaysia. Mr Graham outlined the current trade relationship with the Philippines, noting that there were no impediments to greater trade between the two countries. Possibilities around expanding tourism in the Philippines for Western visitors were shared and the current situation in Mindanao was discussed. The delegation then met with Andrew Rosindell MP, Member of the Foreign Affairs Committee before a working lunch hosted by Ian Paisley MP.

Post-lunch delegates had the opportunity to learn more about the Westminster committee system and topical defence issues with Julian Lewis MP, Chair of the House of Commons Defence Committee. The Senators then met with Minister Mark Field MP, Minister of State for Asia and the Pacific at the Foreign & Commonwealth Office. Minister Field outlined the very positive long-established relationship between the two countries, whilst also stressing that the current ‘war on drugs’ in the Philippines may contribute to creating a negative impression of the country which overshadowed its economic prosperity and in-country opportunities. The delegates expressed their gratitude for the UK Embassy’s proactive projects in the Muslim areas of Mindanao and Minister Field and the Senate President agreed that the exchange of best practice on issues of terrorism was extremely beneficial. Tuesday’s meetings concluded with Rory Wallace from the Civil Nuclear & Resilience Team, Department for Business, Energy and Industrial Strategy, briefing Senators Gatchalian and Ejercito on the UK’s nuclear strategy.

The delegation’s last day in Parliament commenced with Parliamentary Round Table Discussions chaired by Baroness Hooper CMG. Dialogue focused on the possibilities for the UK and the Philippines post-Brexit, the ‘war on drugs’ and how to effectively capitalise on tourism in the Philippines. Lord Hylton also raised the issue of Senator de Lima’s confinement and the delegation again confirmed that she had been detained on non-bailable drug charges and that the judicial system in the Philippines was a slower mechanism than the UK’s. UK members also expressed concern about calls within the Philippines for the return of the death penalty abolished in 2006 at the instigation of the Congress and were assured there remained strong voices in the Senate opposed to such a reversal.  The delegation witnessed a lively Prime Minister’s Question Time and attended a working lunch hosted by Lord Rogan.

Angus MacNeil MP met with the delegation in the afternoon, in his capacity as Chair of the House of Commons International Trade Committee. Energy security, the maritime industry and the Filipino fishing workforce in the UK were all touched upon. The Delegation’s final meeting was hosted by Lord McConnell, where he spoke of his work in Mindinao and the prospects for federalism being able to address terrorism in the area. The Senate President detailed the ongoing discussions on federalism in their Chambers and emphasised the commitment of those involved in the negotiations. Lord McConnell also noted that if the model of federalism was further developed it would enable other parts of the Philippines to compete economically with Manila.

Following this meeting the delegation departed Parliament and returned to the Philippines in due course.  The visit served to underscore the many common perspectives and mutually beneficial objectives of both parliaments, including strong mutual interest on both sides to expand bilateral relations, particularly regarding people to people contacts and trade and economic links in the context of the UK’s withdrawal from the European Union.  BGIPU was very grateful for the assistance of the Embassy of the Philippines which also arranged for the delegation to visit other locations in the UK including Stonehenge and Bath prior to the Westminster part of the programme. 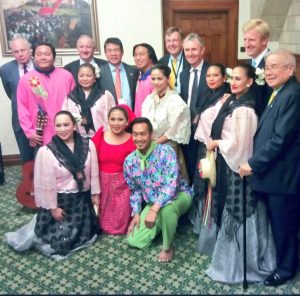 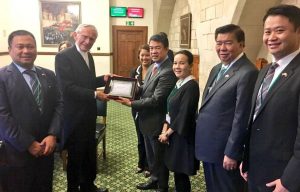 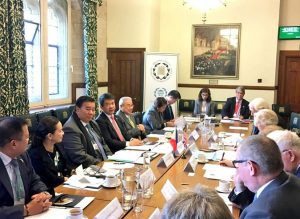