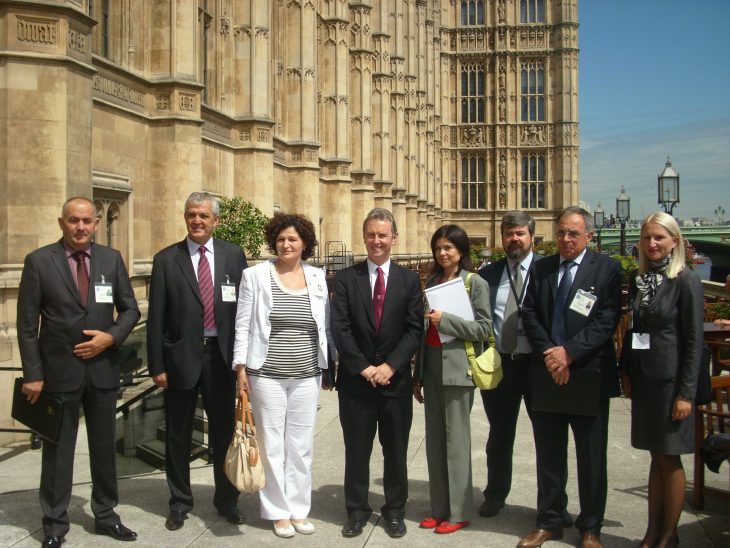 A key point in this was that there must be possibilities for pragmatism, accommodation of differing views and differing key objectives for each party should never be made immovable preconditions to any negotiated outcome.

After introductory briefing on the functioning of the UK Parliament and a tour of the Palace of Westminster with Deputy Speaker, Mr Nigel Evans MP, the delegation had a working lunch with a group of cross-party parliamentarians hosted by Ms Gemma Doyle MP. There was detailed discussion on European Union and NATO enlargement, including key economic challenges facing BiH in its accession process and the implications for the country of Croatia’s imminent accession to the EU. The delegation then met with UK officials at the Foreign and Commonwealth Office who confirmed strong UK support for their bid for EU and NATO membership. That evening they were formally welcomed to Westminster at a reception hosted by a member of the BGIPU Executive Committee, Baroness Hooper.

In subsequent days, the delegation had additional discussions with MPs and Peers, including a roundtable with Bosnia APPG members, a Q&A session with the House of Lords EU Sub-Committee C and in working lunches hosted by Ms Ann Clwyd MP and Lord Bowness. Both meetings addressed their country’s progress on EU/NATO accession and the overall political and economic challenges ahead. Identifying constitutional reform and national identity issues as a key potential stumbling blocks to addressing the ‘bread and butter issues’ of growing the economy and creating employment, the delegation members also confirmed concerted efforts to protect BiH’s cultural heritage, particularly sites damaged during earlier conflict. A key focus of their discussions was to encourage growth in UK/BiH trade and investment links, noting a number of large British companies are already investing in the light manufacturing and infrastructure sectors.

There were also very valuable discussion between the BiH delegation and UK parliamentarians on the progress of the Northern Ireland peace process which the delegation noted presented some significant parallels for their own country. They expressed interest in possible follow-up on this issue in the form of encouraging greater knowledge and understanding of the lessons learned from Northern Ireland in their own country. Key messages they gathered from UK parliamentarians included the importance of recognising basic facts and acknowledging deep-seated feelings in conflict resolution in addition to the practical need to accommodate sometimes difficult and differing realities and requirements of all parties. A key point in this was that there must be possibilities for pragmatism, accommodation of differing views and differing key objectives for each party should never be made immovable preconditions to any negotiated outcome.

Overall, the key message of the delegation was that there was broad agreement among the various political groups in BiH, including across all ethnic constituencies, that they must quickly and cooperatively address sensitive issues around identity and ethnic differences by pursuing effective constitutional reform. This was a clear requirement if they were to advance on the path to join the EU and NATO in order to consolidate their place in Europe. Most importantly, and a key motivations for EU membership, all parties recognised the need to focus on building BiH’s economic prosperity, providing opportunities for trade and investment and encouraging job creation to adequately address the aspirations of their people. This final point was also a key focus of discussions during calls on UK Trade and Investment and the London School of Economics (LSE).

The BGIPU is grateful to all who contributed to the success of this visit, particularly those parliamentarians who hosted key events and parliamentary staff who provided such informative briefings on the UK parliamentary system.

The BGIPU will be following-up with a bilateral meeting with the BiH representatives at the forthcoming IPU Assembly in Quebec City in October and exploring ways to maintain contact with the BiH Parliament, including possibly assisting them to promote relevant conflict resolutions lessons from our own experiences in Northern Ireland. 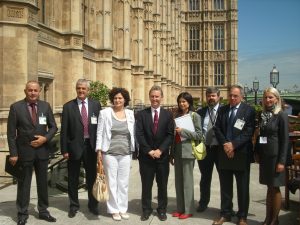