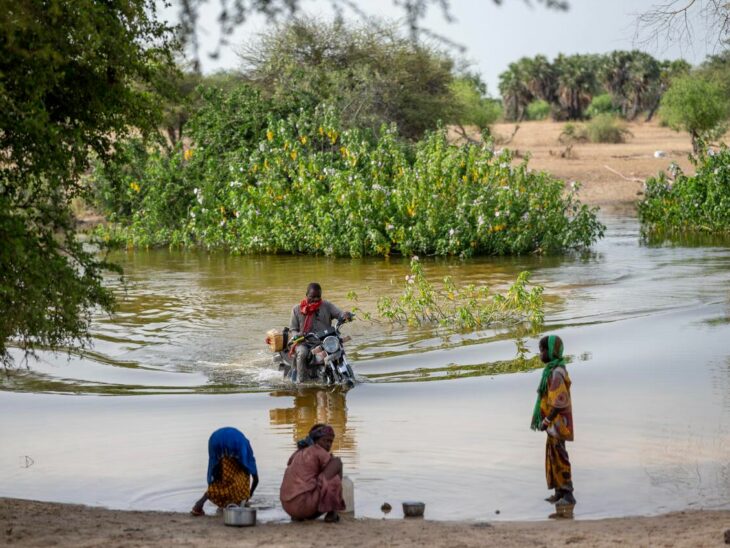 @UNHCR/ Sylvain Cherkaoui. A road made impassable by floodwaters near the Kafia site for displaced people in Baga Sola, Chad.

Communities impacted by climate change are often already struggling with poverty. Floods, storms, unreliable rainfall, and hotter and drier conditions further affect access to human rights and basic needs such as water, food, livelihoods and land. Sometimes, the consequences of climate change become a driver of conflict, forcing people to leave their homes and communities.

Many countries hosting large numbers of refugees are also significantly affected by climate change. Parliamentarians play a crucial role in implementing climate change and displacement responses, ensuring access to protection and assistance during emergencies. They advocate for international treaties and commitments to become national legislation and ensure funds are available to support climate change and disaster laws and policies, reinforcing SDG 13 on climate change. The data collection initiative by the LSE Grantham Research Institute and Sabin Center at Columbia Law School, in partnership with the IPU, indicates that more than 2,120 climate change laws and policies are currently in force worldwide.

The proximity to their constituents and the unique oversight role that parliamentarians play to ensure that refugees and internally displaced persons receive government support were highlighted at the webinar The impact of climate change on displacement and human security, organized for parliamentarians on 21 September 2022.

Ms. Romina Khurshid Alam from Pakistan, a country suffering in the aftermath of severe floods affecting over 33 million people, including Afghan refugees, highlighted the impact of the floods on every facet of life, from food security to widespread water-borne diseases and recovery from loss and damage. The impact, she said, is being felt by everyone and has set back the progress Pakistan has made in achieving the SDGs. Ms. Alam urged the international community to develop short-term emergency strategies to alleviate widespread suffering and to implement long-term prevention and mitigation initiatives.

Ms. Catherine Chabaud urged countries to learn about successful climate adaptation from each other and adapt the best solutions to their local contexts. She highlighted the “Great Green Wall”, which creates a barrier against climate change for countries in the Sahel region, as an example of an initiative to prevent climate-induced displacement. The Wall is “restoring 100 million hectares of degraded land in the Sahel, improving biodiversity, and addressing soil degradation, food security, and access to energy and employment”.

The impact of climate change on displacement, said Ms. Amira Saber , has been a marginal issue at COP for too long. She highlighted the importance of making issues of displacement more central in global negotiations between member states instead of a side issue. Ms. Saber also highlighted how climate change affects water and food security and called for evidence-based solutions.

Ms. Christine Kaaya Nakimwero warned that an increase in populations would have adverse effects on already stretched communities and expressed concern about their capacity to adequately host and receive people displaced by climate change. “Improve the environment,” she said, “so that people don’t have to move”. Increasing investment in and building the resilience of host communities will help avoid shifting vulnerabilities from one area to another.

Mr. Issa Mardo Djabir emphasized the importance of parliamentary oversight of the budget and implementation of programmes targeted at refugee populations: “We went with UNHCR to look at the situation in the field and what was achieved, and collected the opinion of the population. We then discussed with the government to come up with solutions.’ Mr. Djabir shared how the National Assembly of Chad had enacted new laws to ensure refugees were better integrated, including through having access to income-generating activities.

Parliamentarians, said Mr. Andrew Harper, are the link between national governments and their communities. “People displaced by climate are on the margins of habitable land and are the population with the least resources to adapt to climate shocks. More work needs to be done as we move into COP27 so we can support countries to support communities most affected by climate change.”

The Global Compact on Refugees (GCR) references the need to reduce disaster risk through preparedness measures that consider global, regional and national early warning and early action mechanisms, evidence-based forecasting of future movements, and the inclusion of refugees in disaster risk reduction strategies. UNHCR published its first-ever Strategic Framework for Climate Action in 2021 and prioritized preventive measures and solutions in the context of local climate and environmental risks.

The IPU Nusa Dua Declaration, Getting to zero: Mobilizing parliaments to act on climate change, was endorsed at the 144th IPU Assembly by over 100 national parliaments in March 2022. The declaration explicitly recognizes the growing threat of climate-related displacement, particularly in resource-scarce conflict situations. It calls for the rights of persons displaced by climate change to be upheld and for parliamentarians to reflect climate-related displacement issues in national laws. It guarantees accountability when rights are not upheld.

As lawmakers, translators of global policies into national laws, and financiers of projects through budgetary oversight and oversight of government projects, parliamentarians are key to changing their country’s approach to climate change — protecting both refugee and host communities.

The IPU and UNHCR’s strategic engagement ensure parliamentarians at the national and regional levels have access to accurate information about asylum systems and issues such as climate change affecting refugees, the internally displaced and stateless persons. 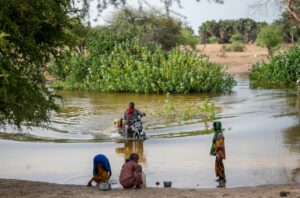 @UNHCR/ Sylvain Cherkaoui. A road made impassable by floodwaters near the Kafia site for displaced people in Baga Sola, Chad.