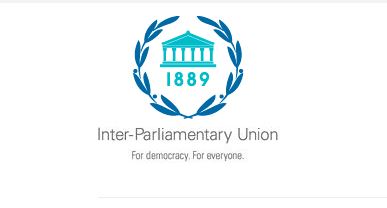 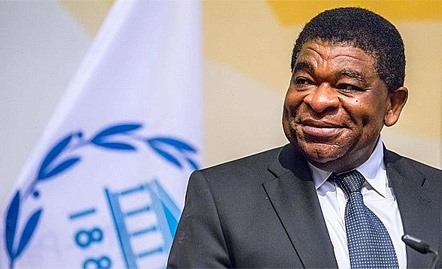 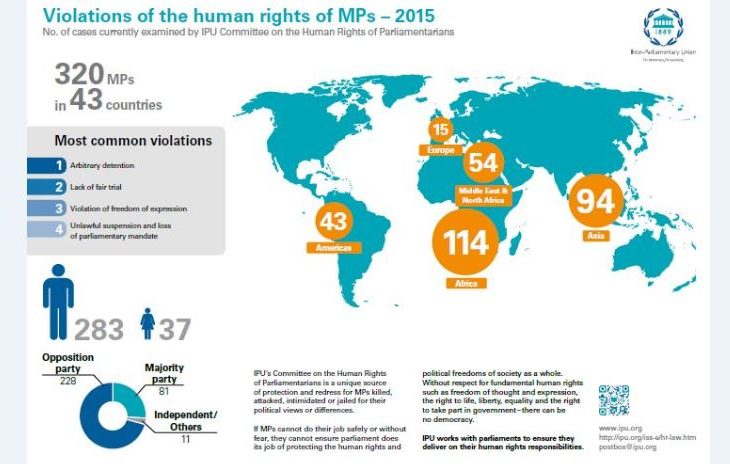 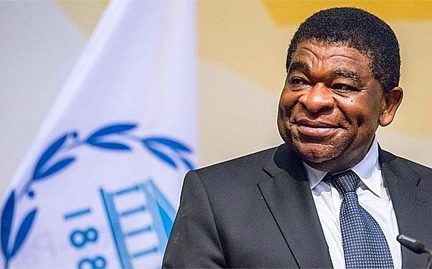 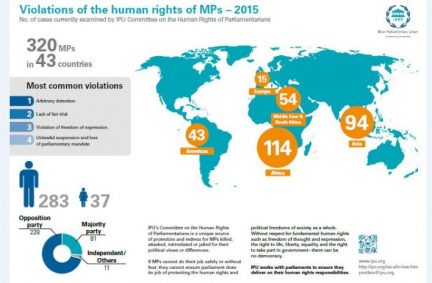 Parliamentarians across the world in 2015 continued to face too many dangers that prevented or hampered their work, representing a real and on-going threat to democracy that needed to be addressed, says the Inter-Parliamentary Union (IPU) ahead of Human Rights Day (10 December).

In its Violations of the human rights of MPs – 2015, which releases figures and trends on the cases being examined by IPU’s Committee on the Human Rights of Parliamentarians, IPU has found that the number of MPs with alleged violations of their human rights has increased overall for the second year in a row.

Created in 1976, the Committee on the Human Rights of Parliamentarians is a unique body that works to provide redress for MPs whose rights have been violated.

MPs can be subject to a range of abuses and types of violence. They include death, intimidation and torture, but the main violations are arbitrary arrest and detention, lack of fair trial, violation of the right to freedom of expression or assembly, and the unlawful loss of parliamentary mandate.

Although Africa continues to have the highest number of MPs with cases – 114 – accounting for 36 per cent of the cases before IPU, the region has seen a slight drop from the 119 MPs in 2014.

Asia, which maintains its ranking as the second most dangerous place to be an MP, has seen a worrying jump in the number of alleged violations. Of the 21 MPs with new cases brought before the IPU Committee this year, 15 are in Asia. With a total of 94 MPs, Asia now accounts for 29 per cent of all cases, up from 25 per cent in 2014.

The 2015 data reveals that the Middle East and North Africa region ranks third with 17 per cent of all cases, followed by the Americas at 13 per cent and Europe with 5 per cent. The Pacific region is the only part of the world with no case of alleged violations being examined by IPU.

“Clearly it is of concern that year-on-year more and more MPs are being targeted in some way. An attack on an MP or an attempt to silence a parliamentary voice is much more than an assault on an individual. It is also an assault on the people and democracy,” says IPU Secretary General Martin Chungong.

“This is a trend that should worry each and everyone of us because if those who are responsible for defending the rights of the people are themselves being persecuted, then everyone’s rights are under threat,” he adds.

The assassination of at least eight MPs this year, mainly in Somalia but also in Afghanistan, Kenya and Yemen, although not referred to the IPU Committee, underlines the very real danger many MPs live with on a daily basis. Of the 320 cases currently being worked on by the Organization and dating from before 2015, 60 involve assassinations. Another two cases are of enforced disappearances, with strong suspicions that the MPs have been killed. IPU will only consider these cases resolved when the perpetrators are brought to account.

2015, however, saw a much higher rate of success in resolving cases. Of the 54 cases that were closed in the year, 38 were resolved satisfactorily and underlined the value of the Committee’s dogged public or discreet diplomatic work to find solutions.

The Committee’s success also highlights the importance of international and inter-parliamentary pressure on authorities and is a reminder of why it must be maintained to bring closure for all concerned.

Lack of fair trial is the most frequent violation (24 per cent) among cases in Africa followed by the unlawful loss of parliamentary mandate (17.8 per cent).

The Committee on the Human Rights of Parliamentarians closed 27 African cases in 2015, reaching satisfactory settlement on 16 of them. A trial observer was also sent to Niger in April.

Asia – With 94 MPs, 11 of them women, Asia is second only to Africa in numbers of cases. Asia also had the highest number of new cases brought before the Committee in 2015 (15 out of a total of 21 globally). The MPs come from 13 countries – Afghanistan, Bangladesh, Cambodia, Indonesia, Malaysia, Maldives, Mongolia, Myanmar, Pakistan, Philippines, Republic of Korea, Sri Lanka and Thailand.

Almost half of all cases in the region come from just two countries – Maldives (30) and Malaysia (14).

The most common types of violation in Asia are freedom of expression (22.3 per cent) and arbitrary arrest and detention (19.8 per cent).

Five Asian cases were closed in 2015, four of them satisfactorily. Two missions were carried out – to Malaysia and Mongolia, and two trial observations took place in Malaysia.

Middle East and North Africa – The region with the third highest number of cases, involving 54 MPs, two of them women. The MPs are from seven countries – Bahrain, Iraq, Israel, Lebanon, Oman, Palestine and Yemen. With 36 MPs in Israeli jails, Palestinian MPs represent the bulk of cases in this region.

The most common violations in the region are arbitrary arrest and detention (19.3 per cent), followed closely by lack of fair trial (18.9 per cent).

The Committee closed 18 cases in the Middle East and North Africa area following complete or partial resolution and carried out a mission to Oman.

Americas – The region is a close fourth to the Middle East and North Africa in the number of cases with 43 MPs, including 5 women. The MPs come from five countries – Chile, Colombia, Ecuador, Guatemala and Venezuela.

Colombia (24) and Venezuela (14) account for the vast majority of the cases.

Threats and alleged intimidations (24.7 per cent) and lack of fair trial (20.8 per cent) are the most common type of violations. One case was closed in the region in 2015 and a visit was carried out to the Inter-American Commission of Human Rights on cases in Colombia, Ecuador and Venezuela.

Europe – The region has the lowest number of cases before the Committee at 15, including five women. The MPs come from six countries – Belarus, Czech Republic, Iceland, Russian Federation, Turkey and Ukraine.

The most frequent violations in the region are on freedom of assembly and association (27.7 per cent) and lack of fair trial (18.5 per cent).

Three cases were closed in Europe in 2015. 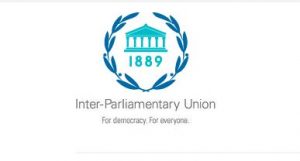 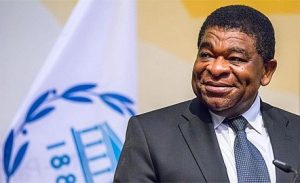 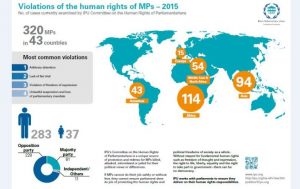