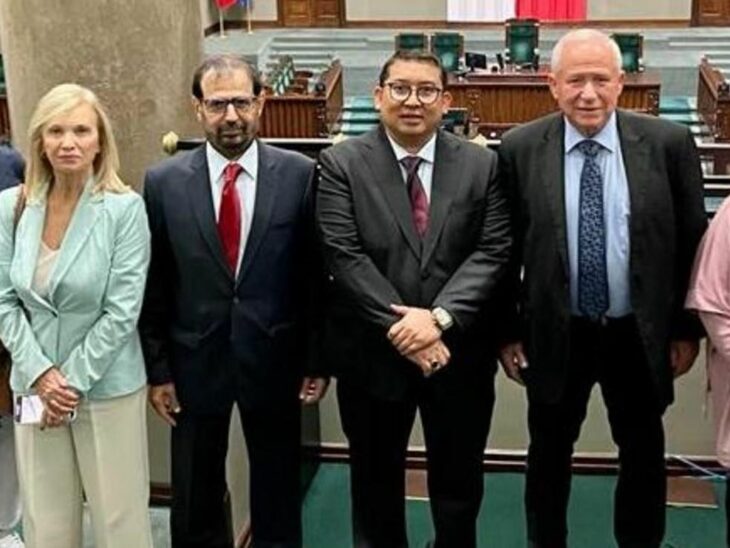 The IPU Task Force for the peaceful resolution of Russia’s war on Ukraine has concluded its initial mission to Kyiv and Moscow. The Task Force – led by MP Dr. Ali Al Nuaimi of the United Arab Emirates and composed of eight prominent parliamentarians representing the global parliamentary community – was set up following the adoption of a resolution at the 144th IPU Assembly in March 2022, Peaceful resolution of the war in Ukraine, respecting international law, the Charter of the United Nations and territorial integrity.

During its mission, the IPU Task Force held open and frank discussions with political leaders in both countries, with a view to advancing a peaceful resolution of the war in Ukraine.

In Kyiv, the IPU Task Force met with Mr. Ruslan Stefanchuk, Speaker of the Verkhovna Rada of Ukraine and other members of the parliamentary leadership from the various political parties, as well as with the Ukrainian delegation to the IPU. The Task Force also met with representatives of the United Nations Country Team and the Prosecutor General of Ukraine. It conducted a site visit to Dmytrivka, Bucha and Irpin to get a better understanding of the human and material impact of the war on the capital city of Kyiv and its neighbouring towns.

In Moscow, the Task Force held meetings at the State Duma with Deputy Chairman Petr Tolstoy and at the Council of the Federation with Deputy Speaker Konstantin Kosachev, both accompanied by other MPs. It also met with Deputy Foreign Minister Andrey Rudenko and the High Commissioner for Human Rights of the Russian Federation, as well as representatives of the Russian Civic Chamber. It took stock of the concerns expressed by the Russian Federation and reinforced the message of the global parliamentary community as manifested in the resolution adopted at the 144th IPU Assembly.

Dr. Ali Al Nuaimi, said: “This is just the beginning of a long road ahead in which we engage MPs from both parliaments and work with them to build bridges to end the war sooner rather than later and to build confidence and relations of good neighbourliness.”

In both capitals, the Task Force underscored the need for prompt de-escalation and the return to dialogue for the peaceful resolution of any grievances, in strict observance of international law. The objective of the mission was to listen, better understand the perspective of the two parties and build bridges so as to help bring about an end to a war which is causing great suffering and destruction, as well as severe global consequences. The Task Force will pursue consultations following this mission, in fulfilment of its mandate.