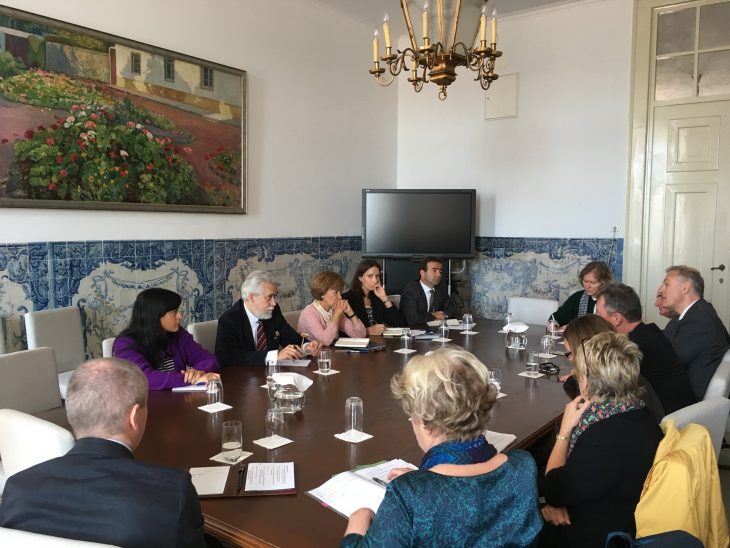 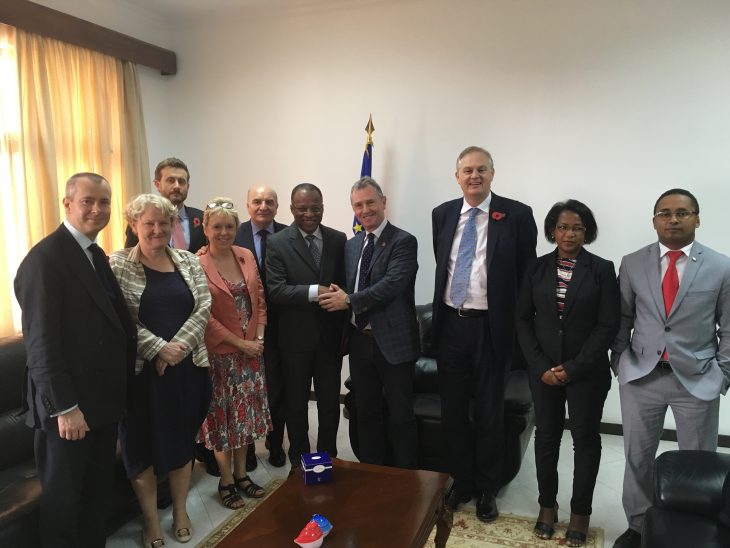 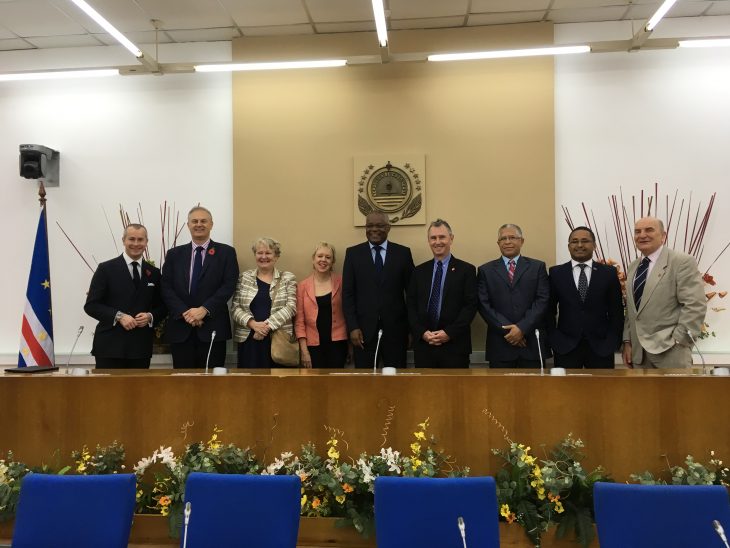 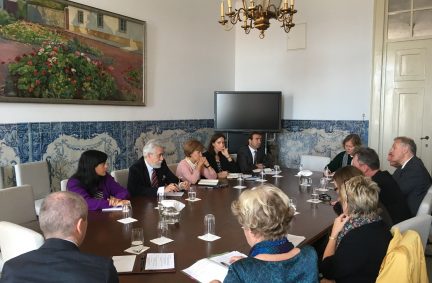 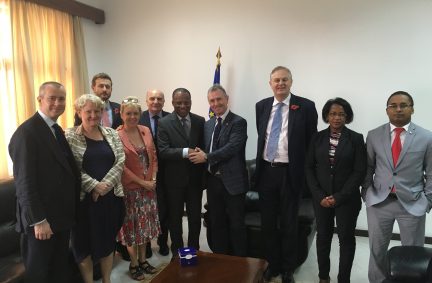 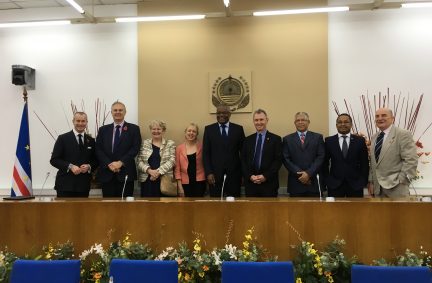 While the 2 days spent in Lisbon focussed mostly on the future bilateral relationship between the UK and Portugal in the context of the UK leaving the European Union, the second part of the visit in Cabo Verde gave the delegation an opportunity to learn more about a small country off the West African coast that is mostly known as a tourist destination, but deserves more credit for its political stability and democratic credentials in an otherwise troubled region. Special thanks must be given to the British Embassy in Lisbon, whose support was crucial in arranging the programme there, as well as to the Cabo Verdean Speaker and his staff for putting together an excellent and high-level programme.

The delegation started the first leg of the visit in sunny Lisbon, where the programme kicked-off on Monday morning with a meeting at the Portuguese Trade and Promotion Agency. The group was lucky to catch Chairman Dr Miguel Frasquilho, a former Minister of the Treasury and Finance, as the Web Summit, one of the biggest global technology conferences, was held in Lisbon that week – a reflection of Lisbon’s local startup scene and increasing cosmopolitan character. He voiced concerns over the volatility of the pound, an issue subsequently raised at a lunchtime event with the British Portuguese Chamber of Commerce.

The delegation also received a comprehensive briefing on maritime security with a focus on counter-narcotics by the Director of the Maritime Analysis and Operations Centre, Mr Frank Francis, which was particularly relevant given the delegation went to Cabo Verde later that week. Monday afternoon was spent visiting the British cemetery, where author Henry Fielding is buried, and a meeting at the British Council, which is also found in the old English quarter of Lisbon. The day finished with a dinner hosted by HMA Kirsty Heyes, attended by several Portuguese MPs from the British Friendship Group.

The programme continued in Lisbon on Tuesday with a meeting with the British Embassy’s Fiscal Crime Liaison Officer, who briefed the delegation about HMRC’s work to uncover fraud and tax evasion involving British national and companies abroad, with a particular focus on Portugal and Cabo Verde, from where he had just returned. The delegation then met with Dr Paulo Ferreira, State Secretary for Trade, and subsequently with Dr Teresa Ribeiro, State Secretary for Foreign Affairs. After a traditional lunch in a local café, where the delegation tasted the famous custard tarts (Pasteis de Nata), the afternoon was spent at the impressive Portuguese parliament – a former monastery – debating with Portuguese counterparts from the Foreign Affairs and European Committees current European as well as global issues, and getting a sense of Portuguese views on the UK’s exit from the EU.

It became clear that the Portuguese take pride in the historic ties with the UK – the Windsor Treaty from 1386 being the oldest diplomatic alliance in the world – and are very concerned about the lack of the UK’s voice in a future European Union. Following a tour of the building, the delegation went to the University Institute Lisbon (ISCTE), where they participated in a town hall meeting with students from the Department for African Studies. The debate focussed on cooperation with African countries and the future of development aid, but the students were also interested to hear from the parliamentarians about the political debate in the UK, especially in the context of Brexit. The delegation then headed to the airport to catch the plane to Cabo Verde, where they arrived in the early hours of Wednesday.

Wednesday morning started in the significantly milder climate of Praia, the capital of Cabo Verde on the biggest island Santiago, where the delegation was joined by HMA George Hodgson, the non-resident Ambassador to Cabo Verde based in Dakar, Senegal, who accompanied the group for part of the visit. The group was warmly welcomed by Speaker Jorge Pedro Mauricio dos Santos in the National Assembly’s temporary site, as the parliament is currently undergoing substantial restoration and modernisation. After a courtesy meeting the delegation went on to visit the construction site to see the progress of the works. The rest of the morning was spent with Cabo Verdean parliamentarians of the External Relations, Cooperation and Communities Committee, where the discussion focussed on the bilateral relationship, but also on current global issues, including the election of the new US President, which had happened overnight.

During the afternoon, the delegation met with the Minister of Justice, Mrs Janine Lelis, who outlined the challenges to ensure a fair and transparent justice system in a country with a small population spread across 9 islands (one is uninhabited). In a similar vein the Minister of Internal Affairs, Dr Paulo Rocha, with whom the delegation met subsequently, explained to the delegation what challenges the country’s geography poses to national security and the police – not only the fact that Cabo Verde is made up of 10 small islands which are only slowly becoming more interconnected, but also its strategic location in the Atlantic triangular between West Africa, the Americas, and Europe. This had not only been recognised by the Portuguese who colonised the islands in the 15th century and used it for the slave trade (Cabo Verde had no indigenous population), but has made it a strategic location for drug traffickers in recent years. The day ended with a dinner hosted by Speaker Dos Santos, where the delegation had a chance to not only taste some local fish varieties, but engage more informally with Cabo Verdean counterparts.

On Thursday the delegation started the day early with a courtesy meeting with the recently elected Prime Minister Dr Ulisses Correia e Silva, who outlined his government’s priorities and explained in more detail the country’s focus on education. With limited resources and employment opportunities in Cabo Verde, the government wants to ensure that school leavers are equipped with the skills and abilities to find work anywhere. Today, far more Cabo Verdeans live abroad than in the country, with most of them living in the United States (about 260.000, compared to about 506.000 in Cabo Verde), and remittances play a significant role in Cabo Verde’s economy.

In order to learn more about Cabo Verde’s economic potential, the delegation then met with Capo Verde TradeInvestment, the body recently established by the government to promote foreign direct investment. This was followed by a meeting with the Mayor of Praia, who showed the delegation around the pedestrianised area of the town, the big market, and also hosted the group for lunch. The afternoon was spent with the CEO of Cabeolica and his staff, who outlined Cabo Verde’s potential for and its use of renewable energy and took the delegation to one of its windfarms near Praia. The country has no mineral resources of its own but wind and sun in abundance all year around, and today already over 25% of the electricity consumed in Cabo Verde are supplied through 30 wind turbines across the four largest islands. Cabeolica was established as the first Public Private Partnership (PPP) in Sub-Saharan Africa and has received funding from DFID.

In the evening, the delegation met with US Ambassador Donald Heflin, UN Resident Coordinator Ulrika Richardson and the Head of the EU Mission, Jose Manuel Pinto Teixeira, to get an outside perspective on the country. The group then took a plane to the island of Sal, where they put their head to rest in the early hours of Friday.

The programme on Friday gave the delegation an opportunity to see for themselves why so many British tourists choose Cabo Verde, and the island of Sal in particular. During meetings with the Mayor of Sal, the CEO of the Resort Group – the premier developer in Cabo Verde and the biggest British investor – and a walking tour around the holiday town of Santa Maria they learned more about the investment climate and potential for future growth in the tourism sector, before heading back to the Praia on the main island. There they met with the President of Cabo Verde, His Excellency Jorge Carlos Fonseca, who had only been re-elected a month before the visit by a landslide of 79%.

After the meeting the delegation went to Cidade Velha, the oldest settlement in Cabo Verde once used as a port for the slave trade, and at one point the second richest city in the Portuguese realm. Today it still has a royal fortress, two towering churches and a 16th-century town square, but sadly it was too dark to see them in their impressive grandeur by the time the delegation arrived. Instead, the group participated in a wonderful farewell dinner hosted by the Speaker and attended by many senior parliamentarians, featuring musical and culinary highlights of the local creole culture. The delegation was truly sad to leave Cabo Verde and their newly made friends in the early hours of Saturday to catch the plane back to London via Lisbon, and are hoping to host them on a reciprocal visit to Westminster soon. Throughout the visit the delegation felt extremely welcome, and the heartfelt reception was greatly appreciated. 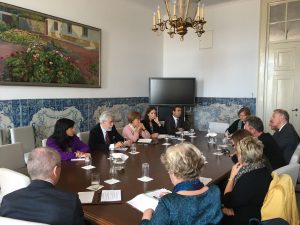 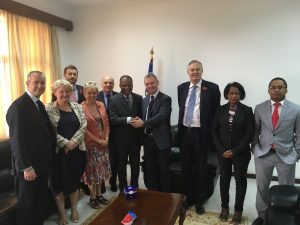 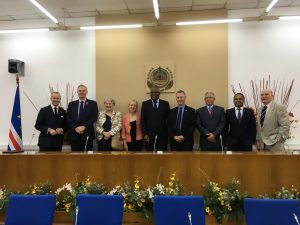