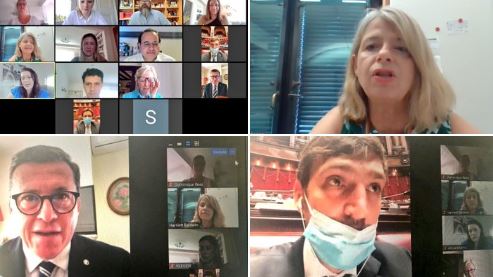 On 25 June, BGIPU convened a virtual bilateral meeting between UK and Italian Parliamentarians. The discussion, exactly one year after a bilateral visit to London last year, was moderated by BGIPU Chair, Harriett Baldwin MP, and was attended by the two co-Chairs of the Italy APPG, Alberto Costa MP and Ellie Reeves MP, along with BGIPU Vice-Chair Baroness Hooper and Executive Committee members Alex Sobel MP and Alicia Kearns MP. On the Italian side, BGIPU were pleased to welcome Massimo Ungaro and Alessandro Cattaneo from the Chamber of Deputies and Senator Raffaele Fantetti from the Italian Senate. The meeting was welcomed by both countries during a time of tribulation when collaboration and communication is paramount, although international travel and face-to-face meetings impossible.

Discussions opened with a focus on respective national responses in addressing COVID-19, including impacts on the functioning and role of Parliaments. UK Parliamentarians expressed their sympathies that Italy was the first European country severely hit by the pandemic, noting how many in the UK watched closely with huge concern at what was occurring. Members from Italy noted how the pandemic hit a month or so ahead of the most severe impacts in other European countries providing some time for others to respond, noting much of its initial response changed over the course of the pandemic with many differing and diverse sources of guidance as international public health advice evolved.

In terms of the operation of Parliament, both legislatures had enforced social distancing provisions but in different ways, noting two of the Italian members spoke to UK counterparts from the Chamber of Deputies in still required facemasks, something not enforced in the UK Chamber which has implemented a cap on total numbers present in debates and a strict 2 metre rule. There had been no hybrid system in place for voting in Italy, but a spoken agreement that only the most pressing bills would be tabled.

Italian members highlighted the importance of physical debates within Parliament as the national forum for discussion to ensure appropriate scrutiny of the government’s actions. Both countries noted how, during a time of crisis, the executive was able to exercise significant power without necessarily needing Parliamentary approval given the comprehensive nature of an emergency response to such an immediate risk to public health. To this extent, they agreed Parliament provides an effective check and balance, even though debate, not least given the potential controversy of the huge sums of money being spent outside normal budget processes.

Ms Kearns MP discussed challenges and risks to multilateralism and how important it was that international organisations be utilised for the common good through cooperation rather than competition as highlighted in recent hearings by the Foreign Affairs Committee. Italy confirmed multilateralism remained very important to Italian foreign policy and the House of Deputies considered such issues is the course of regular reviews although Italy’s overall contribution to the multilateral system had declined in recent years due to changes in the UN scale of assessments but it remained very committed to the effective operation of international agencies, including the WHO which had been very much the focus lately.

The discussion moved on to trade matters discussing how in the post-Brexit period there would be strong motivations in both countries to agree a mutually beneficial deal between the UK and the EU. The time pressure on this was clearly evident, firstly due to the preoccupation with COVID-19 and now following the UK’s decision not to extend the transition period. Baroness Hooper expressed her optimism that agreements would be reached as the fisheries bill is currently passing through the Lords and the standards being adopted reflect closely those of the EU showing there were common interest and positions even in the most contested sectors. She was hopeful this would set a precedent in other areas for similar progress and mutual agreement. There were differing views on the UK side on the possibility of a UK-US trade deal prior to November elections in the US but all agreed the background music from movements around a UK-US agreement would be a key issue factor in the UK-EU negotiations.

During the course of the bilateral exchange, both Mr Costa MP and Ms Reeves MP reiterated the importance of the UK and Italian relationship and the need for collaboration at a time of such upheaval and uncertainty.  Both sides agreed we had a great opportunity to work together on COP26 in Glasgow next year which pointed the way to the future of mutually cooperative and beneficial bilateral relations. Italian Parliamentarians invited the UK Members to visit their country as soon as it is possible, recalling their successful bilateral visit in mid-2019. Both countries expressed their gratitude for the opportunity to have such a fruitful bilateral exchange and looked forward to when we could meet in person as soon as possible. 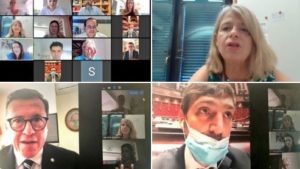