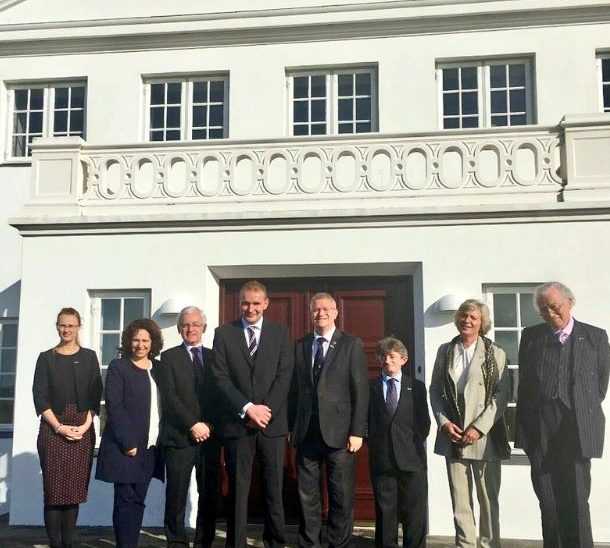 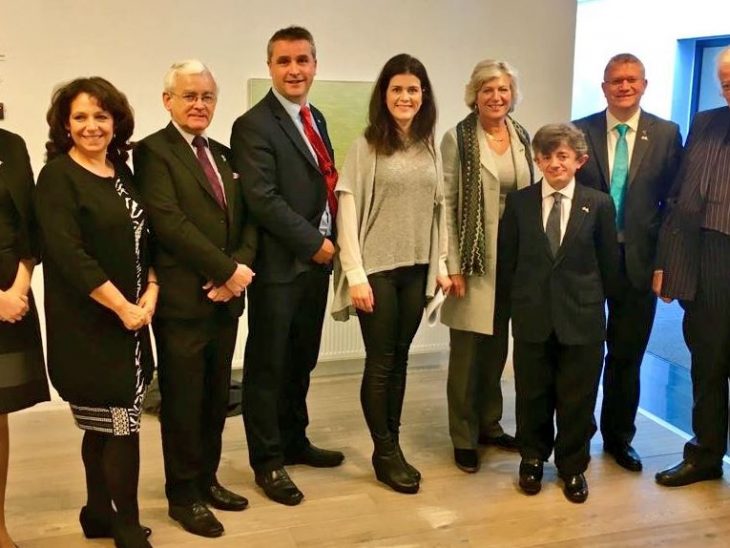 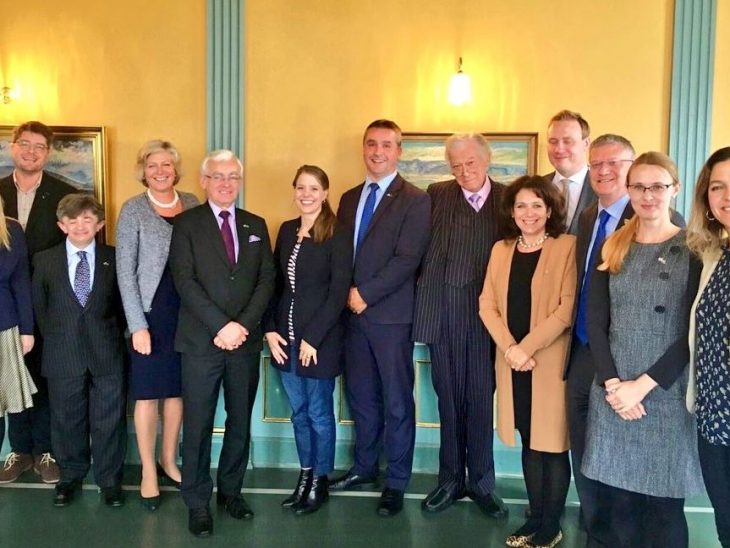 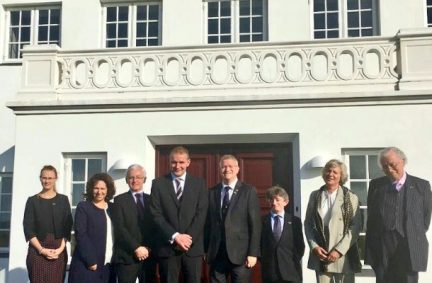 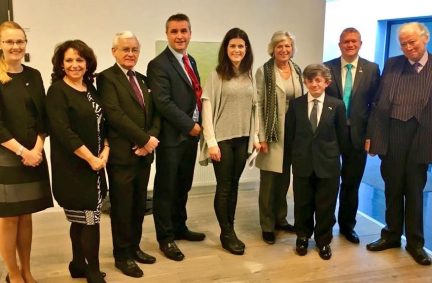 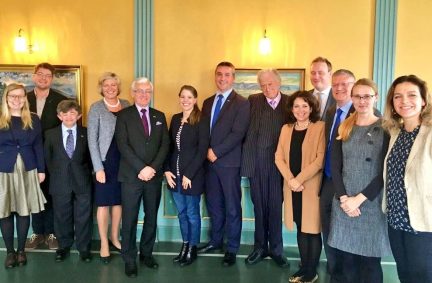 Iceland is a country confounding many who saw it teeter at the edge of the abyss a few years ago and now feeling that what they witnessed was a mere realignment. The UK delegation had fantastic access and contact at governmental and political levels, as well as other institutions, to hear first-hand how Iceland is progressing as a society despite what can only be seen as a topsy-turvy political landscape.

Iceland is of course a fitting place for any IPU delegation to visit as it has the oldest parliamentary history of any independent nation in the world – through its parliament the Althing – its parliamentary approach to life and living dating to over a thousand years. Only the Isle of Man and the Faroe Islands can compete, Man in its continuous nature and Faroes in being even older but neither of those are the parliaments of independent states, although both the Tynwald in Man and Logting in Faroes derive from the same Norse civilisation and at all rooted in the same word; that is, “thing”. So different were these approaches that the Bishop of Bremen centuries ago was moved to write of the unusual nature of governance amongst Icelanders being a matter for “laws “and not “kings”.

Our visit took place against a backdrop of an election just being triggered due to a scandal surrounding the rehabilitation of a sex offender (not the pardoning which was stressed to us during a couple of our meetings) which involved a letter written by the serving Prime Minister’s father which precipitated junior collation partners walking out of the Government, by Twitter, days before our arrival.  Nevertheless, Icelandic politicians especially those in Government, found time to meet the visitors from Westminster as did the President of Iceland and the group are very indebted to him especially and others for their kindness and hospitality during this exchange.

In addition meeting the President, other notable meetings included a meeting with the serving Foreign Minister, Gudlaugur Thor Thordarson, and the subject of Brexit arose on many occasions. The Foreign Minister being from the Independence Party had past connections with the UK Conservative Party and inevitably Brexit was a main topic of conversation. Mr Thordarson supported Brexit and saw it as a great opportunity for the UK which inevitably cheered Brexiteers in the group, particularly as he foresaw few difficulties in a UK-Iceland trade deal. He did however, say that Iceland itself had no plans to leave the EEA and its Single Market. While his views on a trade deal were indeed favourable it did concentrate on what Iceland could sell the UK without the UK imposing tariffs. It was clearly spelled out that any agricultural products imported into Iceland would have to be tariffed to protect Icelandic agriculture, a point on which he was steadfast and highly unwilling to enter even into a philosophical discussion far less negotiate about.

The Minister of Agriculture and Fisheries Mrs Thorgerdur Katrin Gunnarsdottir was preoccupied with sheep numbers in Iceland which drew quite a lot of support and also on Iceland having a referendum on membership of the EU. She and other having previously left the Independence Party over their non-support for the EU and a referendum to choose. She felt Iceland was a rule taker and not a rule maker. However given Iceland complies with the 4 freedoms of the EU and is a member of Schengen, it was politically difficult to see how Icelandic voters will change their status just to ensure their politicians have a say on how the EU is directed.

A meeting with the cross party Foreign Affairs Committee of the Althingi seemed to give the general view of Icelanders on Brexit. While they all agreed on Iceland remaining in the Single Market and Schengen but with differing views on membership of the EU, they were all perplexed by the UK’s decision to leave the Single Market and the EU, and some were more open about expressing that they were perplexed by the actions of the UK Government. That lunch being on the day before the “Florence” speech of the UK PM they were confused by the UK’s position which became more perplexing for them as it was apparently none of the Westminster MPs present were much more the wiser that they were on how “Florence” might transform the EU-UK impasse.  Indeed, as it transprired, no one guessed that just 6 months after triggering Article 50 the UK PM would be asking the EU27 for 2 more years.

Perhaps one of the most interesting meetings and one I have made before through the various changes in Icelandic fortunes over the last decade was at Icelandic Central Bank – Iceland of course is the smallest currency zone in the world but as the Government the wants taxes paid in in Icelandic Kroner (ISK) having ISK is important to fulfil legal obligations as well as daily transactional exchanges.

The Deputy Governor of the independent Central Bank, Arnor Sighvatsson, who seems to deal wearily with all the problems the Icelandic economy throws at him through bad times and good told us that Iceland is benefitting from “strong immigration” a phrase than suprised some of the UK MPs present. He extolled the virtues of Free Movement of Labour from a window where up to 10 tower cranes could be seen beavering in the current Icelandic economic boom. Austerity and the crash now seem like distant history in Iceland which was a clear indication of Iceland’s overall resilence.

The ever strengthening Icelandic currency (about 140 ISK to £ compared to 200 about 3 years ago) had helped lower interest rates he told us. Previously the medicine to lower interest rates he maintained had been either to increase taxes or cut government spending to take demand out of the overheating economy. Air BnB appeared to be pressuring housing and its growth was noted at the Bank, although it was added such is the demand for rooms from those visiting Iceland that an OECD delegation Air BnB for accommodation. It was interesting to hear that since 1922 that the ISK had lost 99.5% of its value which perhaps explains the Icelandic view of money being transactional rather than store value. Unemployment was between 1 to 4% almost constantly.

A final mention should go to fisheries at fish processors, HB Grandi, we heard again the virtues of free movement of migrants (who were paid the same as locals). How Icelandic fisheries are in effect privatised which had the benefit of stability for investing in labour saving technologies with now only 4% of the population involved in fisheries, where once was 25% but more caught and frozen at sea meaning a better quality product landed and taken to the plate. The downside is that traditional fishing areas no longer have any entitlement to fish as they have no quota. 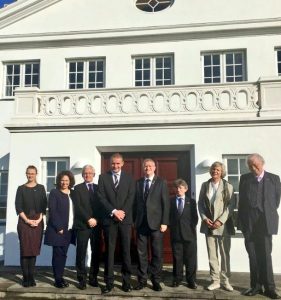 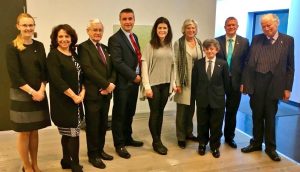 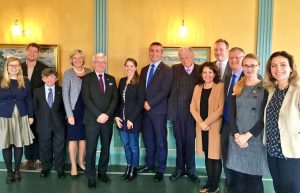