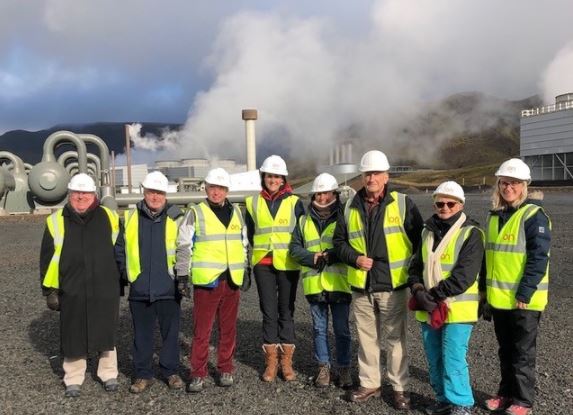 From 15 - 22 September 2019, a cross-party group of MPs and Peers from the All-Party Parliamentary Group for the Polar Regions spent eight days circumnavigating Iceland by road, having meetings with politicians and scientists en route.

From 15 – 22 September 2019, a cross-party group of MPs and Peers from the All-Party Parliamentary Group for the Polar Regions spent eight days circumnavigating Iceland by road, having meetings with politicians and scientists en route.  All members of the APPG for the Polar Regions were invited to apply to take part in the trip. Due to events in parliament in the build-up to the trip, four MPs and Peers that had originally signed up to attend had to withdraw at the last minute.

The main purpose of the APPG Polar Regions visit was: To build relationships with the Icelandic government with a view to post-Brexit trade and international relations; to connect with Arctic Council groups (Iceland is currently in the chair); to witness the effects of climate change on the country’s glaciers, flora and fauna; to understand the impact of Iceland’s volcanic activity at a local and international level; and to learn about Iceland’s renewable energy initiatives.

After arriving at Keflavik airport, the Group immediately set off to explore the ‘Golden Circle’, stopping off at the site of the ancient parliament, Thingvellir, as well as the Gulfoss waterfall and Geysir. Work began in earnest the next day with a series of five meetings in the Reykjavik area, starting with President Guðni Thorlacious Jóhannesson at the Bessastadir Presidential Residence. He is the sixth President of Iceland and lived in the UK for several years while completing a PhD in History at the University of London.  The President is elected by popular vote and is a largely ceremonial head of state, also serving as a diplomat. President Jóhannesson elaborated on his political role – the president has the power to refuse to agree with bills that are presented and if this happens – as with the UK-Icelandic Cod Wars in the 1970s – the bills will pass, but the President’s refusal will trigger a referendum.

Next we met former Icelandic President Olafur Ragnar Grimsson at Reykjavik University. He is the Chairman of the Arctic Circle Conference and founded the Arctic Circle in 2013 with the aim of initiating discussions among all countries that have an interest in affairs in the Arctic.  President Grimsson outlined the increased US interest in the Arctic. Trump has initiated a shift in US policy with regards to the Arctic, which Grimsson suggests, the UK should examine closely. Speaking frankly, Grimsson said that the UK is at the edge of a new Arctic geopolitical territory and is currently being sidelined because it doesn’t have an Arctic presence. James Gray responded that he would make every effort to create a larger British political presence at the 2020 Arctic Circle Assembly.

During a meeting with Foreign Minister Guðlaugur Þór Þórðarson and Einar Gunnarsson, Director of Arctic Affairs and Chairman of the Arctic Council, Mr Þórðarson said that the UK and Icelandic governments share a strategic interest. Addressing the issue of China, Þórðarson said that Iceland wants to have a workable relationship with China but, while they’re familiar with dealing with the Russians, the Chinese are an unknown entity and their democracy and human rights record is a concern.

At the Icelandic Meteorological Office, Ms Jorunn Hardardottir and Dr Thorsteinn Thorsteinnsson gave a lecture on The Effects of Climate Change on Iceland’s Glaciers. Next we headed to the Hellisheidi Power Station near Selfoss where the CEO, Bjarni Bjarnason gave a presentation on Iceland’s geothermal energy. His colleague Edda Aradottir, a scientist who has been pioneering carbon capture projects at Hellisheidi, explained about CarbFix – the industrial process of capturing CO2 from emission sources, dissolving it in water and injecting it permanently into sub-surface basalt rock.

Over a busy few days, the Group travelled around Iceland speaking to Arctic Council working groups and whale researchers in Akureyri, visiting the new Chinese-Icelandic Arctic Observatory at Karholl, touring a scientific field station in Skalanes, and meeting a sub-glacial volcanologist in the Eyjafjallajokull region.

We would like to extend our sincere thanks to the BGIPU for their generous support for this visit. 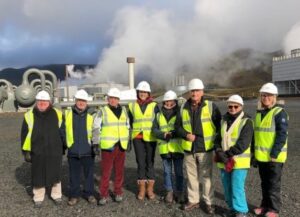 From 15 - 22 September 2019, a cross-party group of MPs and Peers from the All-Party Parliamentary Group for the Polar Regions spent eight days circumnavigating Iceland by road, having meetings with politicians and scientists en route.